Catwoman is upon us once again. To say I've grown tired of this series is at this point an understatement. There are a handful of books now that are most definitely being bought by me begrudgingly. I certainly hope I am warning people off this book because it would pain me to know that I was aiding this series. Still, hope blooms eternal, and this is Nocenti's first story separate from any official crossovers (though it is worth mentioning that Catwoman's future plots appear to be tying in closely to Justice League of America), so maybe this issue will be better. By the way, let me get a prediction on the record even though it is kind of tangent to this issue. Many are guessing based on the solicitations for Justice League of America and Catwoman that Catwoman will end up betraying the JLA. I think this is a red herring, and the true traitor will be somebody else and Catwoman will be framed. You have to always watch the other hand on these things, but enough tangents. Let's dive in to this issue and see what we have. Does Nocenti turn Catwoman around and deliver the purrfect Catwoman story, or is this tale about as pleasant as a midnight hairball?

In this issue, Selina and Gwen plot a museum heist as Detective Alvarez closes in on their tail.

It's a long way from “purrfect,” but this issue is actually not too bad. I've learned to expect little of Nocenti's Catwoman, and the first several pages bore out this expectation, but after moving past those, I found there was actually some interesting aspects to this story.

The first thing that perked up my ears in this issue was the way we actually got to see Selina plan one of her jobs. Throughout this series, we see Catwoman in action doing her thing, but we almost never see the planning that goes in to her crime, and really, it is surprising that this elements of the series has been omitted. In a lot of adventure crime fiction, the unveiling of the scheme is half the fun. (think Ocean's 11 or The Italian Job) It builds tension to know what should happen, and then that excitement is usually heightened when something goes wrong. Perhaps this has been missing in the Catwoman story so far since all her jobs have been either extremely straight forward or impulsive. Regardless of why it has been missing thus far, I hope the planning element of the story makes more frequent appearances for it gave me a chance to see Selina and Gwen's intellects in action, and it also gave some time for the two to interact. Catwoman needs some actual supporting characters, and it was nice to see a little (just a tad) fleshing out of Gwen.

Nocenti seems to be playing with a mystery villain, and I am on the verge of being intrigued by it. The thing is, it appears that the one skirting around the edges of Catwoman's adventure is Emperor Penguin as featured in Detective Comics, yet this issue merely implies it without ever coming out and saying it. (Spoiler) The final scene was confusing. We already know that one of the thugs said the bad guy was “some skinny dude...in a tuxedo,” and at the end of the issue, someone matching the description is shown holding a bird cane, yet we do not see the face. Why hold on the reveal? It doesn't track with me.

At the same time, we know that somebody is using a rat motif. It doesn't seem to be Emperor Penguin, but the drugs were stamped with a rat logo, and the kids dealing it made several references to rats during their part of the story. Furthermore, I think Nocenti was trying to give a rat vibe to the whole issue. I might be reading too much into it, but it sure seemed as if Nocenti went out of her way to make everybody in Gotham look like a money grubbing, dirty, petty low-life. I found the vibe to be kind of depressing, but if Nocenti is doing it for thematic reasons and does not plan to do this every issue, then I can be okay with it.

I Am Woman! Hear Me Roar!

Under Nocenti's pen, Catwoman has become a bit of a chatterbox, and I can't say I much care for it. I would say she was more talky than in her pre-Flashpoint run while the last writer, Judd Winick, handled her, but Nocenti has cranked it up another notch. It seems Selina has to prattle on constantly in battle, and though she does occasionally say something amusing, her comments miss a lot more than they hit. It's clear that Nocenti is trying to make the dialogue feel fresh, new and clever, but...her success is mixed at best. Catwoman: “I know its hip to keep your shoelaces untied, but they trip you us when you run, and you are runners.” Honestly, the constant prattling and weak attempts at humor that come out of Selina's mouth reminds me a lot of Barbara Gordon's constant dry snark in her inner monologues in the respect that on both accounts, the attempt to sound clever and intelligent fails.

It's not just Catwoman who has some questionable dialogue. Detective Alvarez and his new partner talk back and forth to each other like they are tying to out cool-cop one another.

1. There were a lot of subplots in this issue, but they did not come together. This is not necessarily a problem at this point, but I hope the dots will start to connect next issue.

2. I have mixed feelings about Rafa Sandoval's artwork in the past, but I thought it was okay in this issue. I did really like Catwoman's outfit and stance on the opening page.

3. Once more, Catwoman's whip seems to be infinitely long.

I did not expect much from this issue, and at the end of the day, I did not get a whole lot, but I did get some enjoyment from this issue. Nocenti seems to be gearing towards making Catwoman a light hearted adventure crime story, and I can respect that vision for the character, but the vision still needs some fine tuning. Nonetheless, it looks like Nocenti is honing her craft, so maybe this series could turn in to something good with a little luck. For the moment, I would only suggest buying this issue if you are a big fan of Catwoman or Nocenti. However, this is just the first part of a longer story, so you might want to wait until more issues his the shelves so we can get a better idea of this arc.

Red Hood and the Outlaws #17

Other reviews for Catwoman #17 - Rat Tales

It's Sad That This is Actually An Improvement 0

At this point, this series literally had no where to go but up, unless perhaps Rob Liefeld started doing the artwork. If that happened I would probably be able to give my first ever truly 0/5 score. Last issue was an absolutely nightmarish atrocity, so at least this issue was.... I don't want to say 'tolerable' but at least it didn't make me want to commit mass homicide.What it really comes down to, is that this issue wasn't exceedingly horrendous on every level save artwork like the previous is... 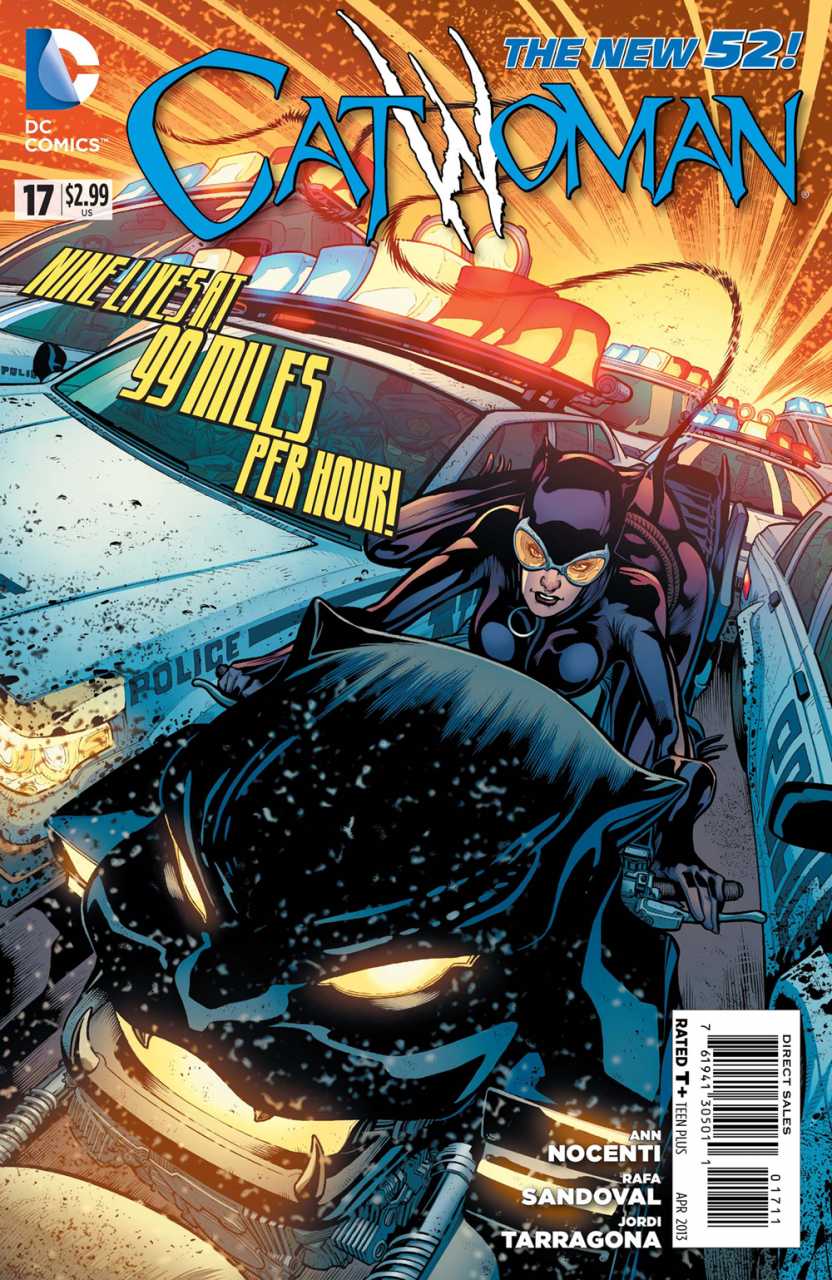