the_mighty_monarch's Catwoman #15 - In the Zone review

I Just.... Hate Everyone Right Now

Rafa Sandoval has nice artwork. The animated smoothness gives a nice sense of fun to this series, and he always manages to stick a lot of things into big panels without crowding them. That is perhaps the only good thing you'll hear me say about this issue, prepare for ranting about each rage point followed by a more professional wrap up. You can stay for the the fun, as I always aim to entertain with my hatred, but if you want the short version, Nocenti has good ideas with absolutely ATROCIOUS execution. Her writing is about as bad as Liefeld's artwork. Winick was amazing in this series with depth that was mostly unnoticed and Nocenti is running this into the ground and beyond.

Nocenti, do you not understand how motorcycles work? You've clearly got Catwoman speeding past already fast moving cars, these people on the street wouldn't be able to make HALF the observations they would've needed to make based on their reactions. Catwoman's motorcycle is pretty awesome, but I'm giving credit for that once again to Sandoval whom I currently pity for being roped into this mess. We're on page 1.

Immediately after that, there's a short burglary scene in a college party that is completely breezed through. Consistently I'm feeling a sense of uncanny detachment from anything resembling actual events. It's like things are taking place in some other plane of existence where things happen twice as fast. And she doesn't even try and use her sex appeal ON EXACTLY THE PERFECT TARGET FOR IT. And then sudden;y they're out of it as the police show up. Not even a HINT of repercussions or any semblance of fallout.

And then Catwoman goes to the hospital where that kid she saved from Joker is, and gives him a stuffed animal apparently filled with money or priceless gems and fails miserably at a heartwarming moment, and not even the kind of failure that's in character. Just.... dumb. She says there's a reason it's ugly, the kid says it's not ugly, then she says why it's ugly and he's just like "Oh I understand, it's pretty on the inside but ugly on the outside."

And THEN we get over to another scene with her contact.... still no word on fallout with Gwen, just jumping right here. THIS whole scene is rushed even worse to the point where it gave me a headache trying to follow who was trying to do what for what reasons. Were they about to sleep together or not? I don't even know.

Then suddenly she's already halfway into The Black Room disguised as a homely scientist or something. She puts on some huge nerd rage show....... for no apparent reason. She seems to imply there was a reason, except at that point there wasn't and she doesn't let us know what security measure it was supposed to have helped her bypass.

It's utterly fascinating that an issue can be this heavy with dialogue, and yet feel immensely rushed. Everyone seems eager to drop whole chapters of exposition to keep things moving, and Nocenti doesn't understand what she's doing. She's leaving too little time between panels. Characters are saying far more in a single panel than humanly possible in order for them to be where they are in the next panel. And this happens all the time in this issue. Especially as soon as Catwoman and the scientist make it into The Black Room proper. They have a 5-10 minute conversation in the space of a few panicked seconds. This defies comprehension. And why is he so eager to help this woman he just met who berates the hell out of him? And not, you know, THE PEOPLE HE WORKS FOR. And then everything just happens at once and I lost track of what was going on except the final page, which should be a massively huge moment. But this crossover is so detached and quiet that I can't imagine how this is going to end up being significant in the long run.

Ann Nocenti is 85% terrible. She has some damn good ideas, bless her, but she needs to take a LOT Of damn writing classes, or get a co-writer to do the actual scripting because her stuff is on the brink of unreadable.

Other reviews for Catwoman #15 - In the Zone

In the ZoneTo see this review with pictures, Click Here.I am actually quite eager to read this issue of Catwoman. After the catastrophe which was the Death of the Family tie in, I have a major rubbernecking desire to see what further atrocities will come from Nocenti’s arc. Whatever happens, part of my brain will be playing Yakety Sax. I have no doubt that I will be amused with this issue, but will I be amused because this issue is high quality or because it is so low as to be comical?In this is...

4 out of 6 found this review helpful. 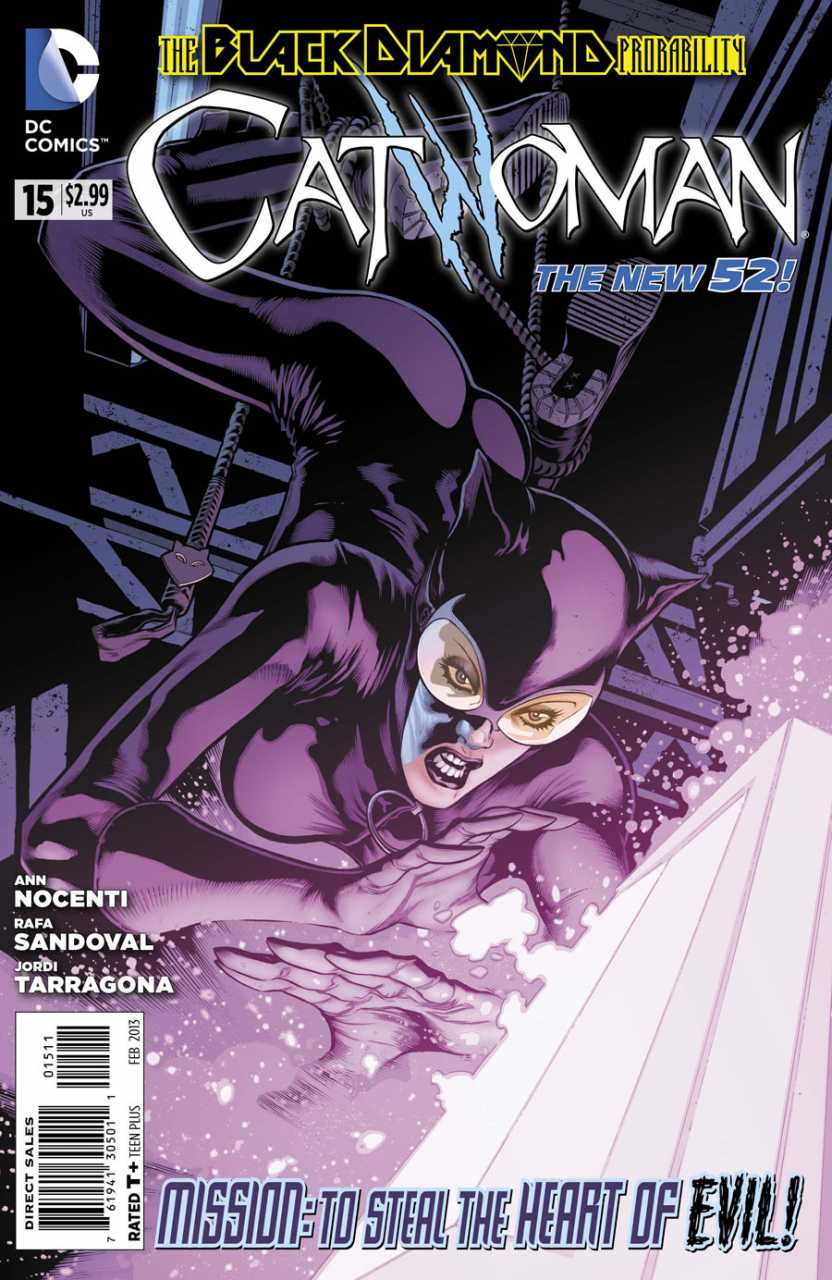