The Jokes on Us

I have enjoyed the better part of this series but it's not been brilliant and since Ann Nocenti joined as writer it has dropped even further down in quality.

This issue sees Catwoman at the mercy of Joker who has strapped a bomb to the chest of a child Catwoman was was trying to save. Joker continues to play with Catwoman telling her that all he wants is for her to play her part in his scheme.

This issue was bad and probably the worst Catwoman issue I have read so far whether in this series or any other. I just wish someone besides Nocenti would write this comic as she clearly doesn't understand the characters as much as she should. I also thought that with Nocenti coming onto this series that we would see less of Catwoman revealing herself as most woman have complained about that. I personally don't mind it from time to time but this series has been doing it far too often and it seems that when the writer can't think of something to add to the story they'll just add a scene were her cloths come off to fill a few pages.

The art from Rafa Sandoval is in this issue is good and the only thing positive I can probably think about this issue. I don't however like the way he draws peoples hair or the Joker. At certain points during this issue Catwoman's hair is all over the place and the way it is drawn it looks like one huge clump, which is very unrealistic. The facial emotion throughout this issue wasn't bad and I liked how you could easily tell whether the character was happy, upset or in discomfort.

I didn't like the way Joker was written in this issue as although he's very unpredictable he seemed out of character for the most of this issue. I did however like that Catwoman tried to fight Joker at certain points but it seemed a bit too much like she was desperately trying anything she could to get away or get the upper hand. I don't understand why Catwoman doesn't just try and beat the living hell out of Joker. I understand that she wants to find out why he's tormenting her and if he knows anything about he but I'd still have though that she would have had a proper go of beating him up first.

I like how Joker's been involved in all the crossover issues so far but don't understand how he's been able to do all the things he's been doing. Okay you could say that all these events are happening at totally different times and that some of the events will be setting up others. It however appears that all these things are happening at the same time however and it just makes me question where Joker gets the time to do all this.

I also didn't like how Catwoman appeared to not know who Joker was. I know that things are different since the New 52 started but even of she hadn't met Joker before it's already been established that Batman has had numerous run ins with the Joker in the past and she was bound to have at least heard something about it, whether from Batman himself or someone else. I also found it a bit silly that Catwoman didn't just admit to Joker where she stands with Batman, and even if she was wanting to hide her feelings towards Batman from Joker it couldn't be more obvious what she truly felt.

There was also a secret about how Joker sees Batman near the end of this issue which I won't spoil. I will however mention that what was revealed was not only stupid, it made no sense. I know that Joker has a twisted mind and that it always appears that neither Batman nor Joker truly want to see the other dead, as they wouldn't have a big enough opponent, but what was revealed in this issue went way beyond that.

This was a bad issue and unless you are wanting to read everything related to Death of the Family or don't want to miss a Catwoman adventure I would recommend not buying this comic. It is ridiculous and is just degrading the character, as well as this storyline.

Other reviews for Catwoman #14 - To Skin a Cat

Click here for a review with images.To Skin a CatThe last issue of Catwoman was fun but utterly stupid. Someone apparently set up chess pieces across the city with people locked inside. When one piece takes out another, the people inside die, and Catwoman got caught up in this ridiculous situation. Does Catwoman manage to win the game in this issue, or does she turn out to be nothing more than a pawn in someone else’s game.In this issue, Joker is revealed to be the force behind the chess scheme,...

Everyone, Smile Yourselves To Death 0

So, are you guys happy? Winick's Catwoman was too 'sexy' and 'shallow' for you? Catwoman who SHOULD be sexy, and was actually quite rich in depth. Well the sexy's gone, replaced by......... piles of manure. At this point I have no idea why anybody would enjoy Ann Nocenti's writing, her Green Arrow is terrible and her Catwoman is atrociously horrible.It has nothing to do with knowledge of the characters, Nocenti is honestly just a terrible writer. She has good ideas, but absolutely no ability to ... 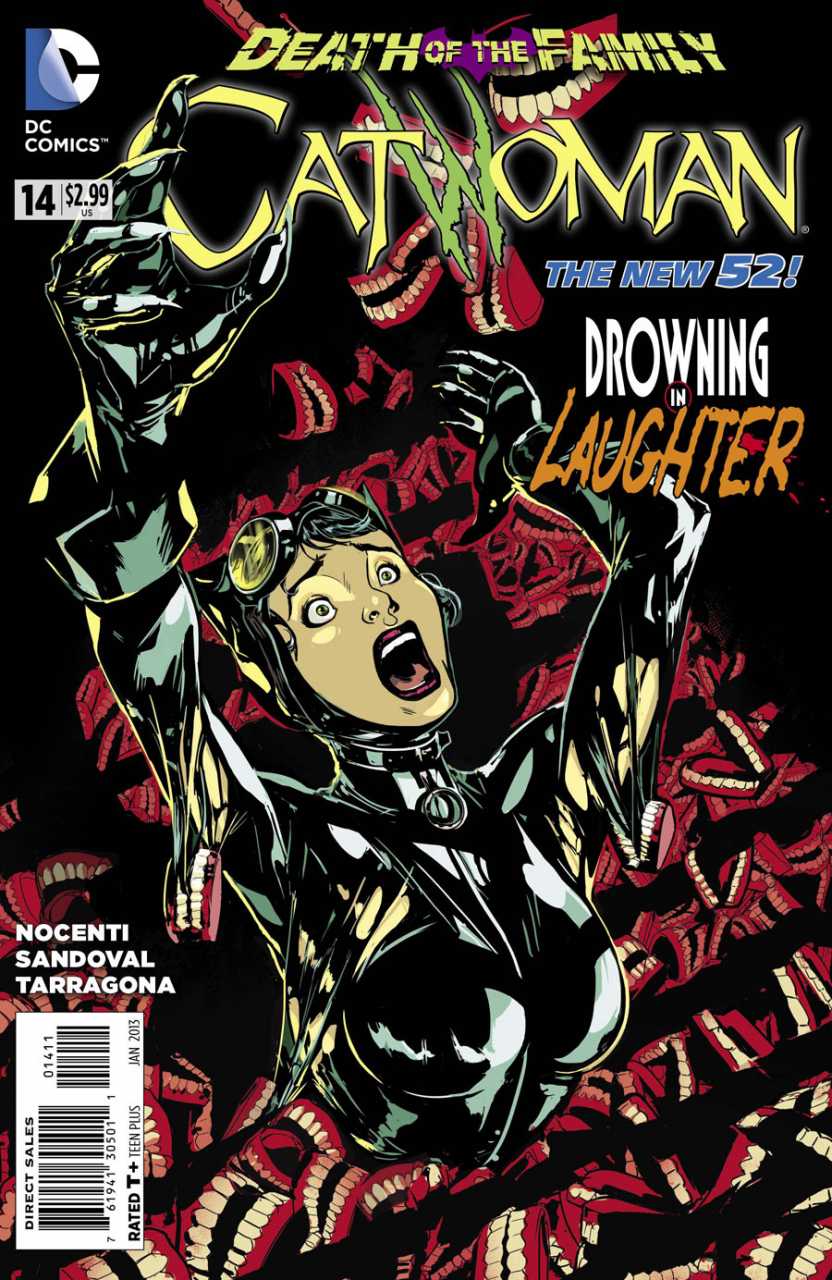