After re-reading the 12 issue run of Black Condor, I'm pretty sad. This was a series that had some really good potential, but when downhill pretty fast.

At the start, the premise seems interesting: here's this Native American, Ryan Kendall, who has been given the powers of flight, telepathy, and enhanced senses by his evil uncle, the head of a secret society. But instead of playing hero, all Kendall wants to do is hang out in the pine barrens of New Jersey protecting the wildlife with his buddy.

I guess that's when the first alarms should have rung... when you have a super-hero book where the starring hero doesn't want to be a hero, and instead wants to hang out in the woods, well, what kind of excitement can you expect? In fact, in three issues they shoehorn threats into the pine barrens that make little sense, just to spark some action.

Now, there are some good pieces in here. I like how issue #7 revolves around the trial of the guy that Black Condor caught in issue #1, and that his testimony is thrown out when he refuses to use his real name. We rarely see the repercussions of the deeds heroes do. I like the fact that both Condor and his best friend Ned Smith are Native American, but it's never played up to stereotype levels. I like the occasional scene where Condor does the opposite of what a super-hero would do, confounding the villains.

But those good pieces are mired in the mud that is the series. We have an evil grandfather, Creighton Kendall, running the shadowy Society of the Golden Wing, who is intent on retrieving Condor. He's got armored shock troopers at his disposal, yet he's barely a nuisance. He *knows* Condor's in the pine barrens, and yet for some reason waits for Condor to come to him before making a move... and only then by accident. We've got the ghost (or spectre, or hologram... I wasn't even sure until I checked Black Condor's entry in the DC Comics Encyclopedia) of the first Black Condor, which only speaks to Ned Smith, but we have no idea why, other than it's to help guide Black Condor on his destiny. He only randomly appears in two issues, and is used more like a deus ex machina than anything else. We've got an arbitrary trip to Gotham City for nothing more than a Batman guest appearance and an attempt at a sales boost.

All in all, this is a pretty dry read, and I would recommend passing.. or reading his appearances in James Robinson's Starman instead.

Other reviews for Black Condor #1 - A Dream Of Flying 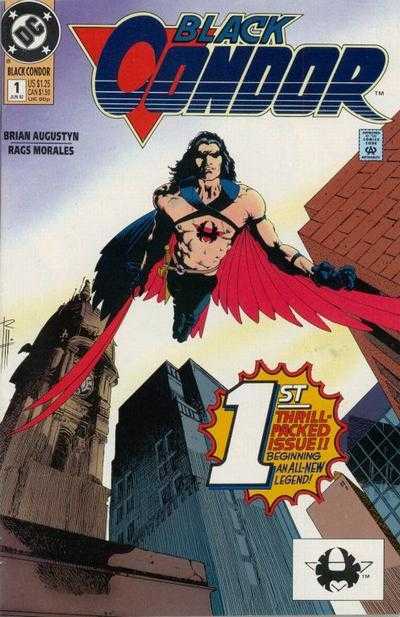