liberty's Beware the Creeper #1 - Where Lurks The Menace? review

Here is the Creeper in his second appearance but first self titled comic. This is a complete story in one comic and that hurt it a bit. It is a mystery as Creeper struggles to find out the identity of the Terror. With so many new characters and suspects it was kind of clunky as it came to a conclusion.

Now don't get me wrong this was still an enjoyable book. Especially, for a fan of the sequential art. Someone who enjoys the history of comics and reads something older than themselves. I know it is too bold to call it classic literature but, in the comic book world it is classic and there are too many short term comic fans who don't bother to get the roots of the comic world. Choosing to rather dip their toe without ever knowing the joy of fully submersing yourself into the world of comic books.

One of my favorite parts in this book is the language. Some of it seems so corny (I mean that in a complementary way) and some of it is dated yet all of it is priceless. I love how Jack Ryder is a no nonsense guy until he dons the Creeper costume. It is almost as if he represses himself. He seems too stiff to be the Creeper and yet he puts his all into it. Mr. Ryder is also arrogant and pompous. One of my favorite moments is when he is introduced to Vera Sweet and he pretty much says he is not going to like her before even meeting her. This personality adds to his character. He is not your average Superhero and that adds so much to the story. He is not a carbon copy.

I liked this story and all in entailed. I really enjoy the creation Steve Ditko gave us. Please read this book don't be the shallow rooted fan. I give this book seven out of ten stars.

Other reviews for Beware the Creeper #1 - Where Lurks The Menace?

This is a review for Beware the Creeper #1-6. I have been interested in the Creeper since I had seen him in shows like Batman Brave and Bold and Batman the Animated Series. He has been a character that has stood out to me with his outlandish and cool costume, his hyperactive fighting style, and his crazy laugh. I have been wanting to read his comics for some time and now I finally got the chance. This series begins with Jack Ryder investigating a criminal known as the Terror, but he cant get inf... 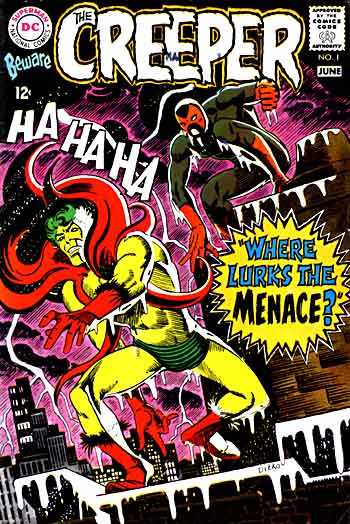