This is the second and final issue and review in this series of collected horror stories of sorts. While the first issue was solid and worth its money this, the second issue, is the real deal!

Well okay, I don't really like the cover of this issue much and it doesn't tell you anything about the short stories inside. Perhaps, if anything, it lets you know there's some weird stuff ahead but you already know that by reading the title.

It starts with a pin-up of "Lo"; a story that was already told in the first issue and this pin-up just serves as a short summary of that story and one gorgeous piece of creepy art. If you love such creatures than you wish this issue was bagged with a giant-sized poster of the winged and three-eyed demon. Such a beauty!

"Conquest of the Banana Planet" is a brilliant homage to the moon landing and whatever drives people to discover unknown lands, and planets for that matter, and what obstacles there could be. Contrary to most of the short stories in the first issue there's some moral here, and actual story. Still no happy ending though. A lighthearted story that'll make you smile. -- 4 pages.

"Scraps" - Did you ever want to know why the dinosaurs extinguished (themselves)? This gorgeous story will show you how. No words. Just pictures. Gorgeous pictures of battling dinosaurs... especially on the third page! -- 8 pages.

"Earth Invasion" is a story that really feels like Mars Attacks featuring more of that brilliant art with a fantastic panel layout and a surprising ending which I really didn't see coming. -- 4 pages.

"Arena" is one of the best short stories I've ever read. Period. No spoilers! It's a rather unusual story. It's vicious. It's cruel. It's merciless. It's 3 pages of pure brilliance. A fantastic idea for a short story! -- 3 pages.

"Nutpeas!" obviously is a word play and very satirical homage to Peanuts. Another story that you want to read and see without being spoiled already. The art is nothing special here, neither is the story of Cholly Bran and his misadventures, however, it's hilarious and you'll see some of the original characters in quite different roles; especially on the last page. It's not even funny anymore. I mean it is but it definitely should not be... not at all. -- 6 pages.

"Hell's Bells" is a hellish pin-up that rounds up the Bedlam! experience nicely.

A great collection of very different genres and short stories. What one shouldn't do is confuse this anthology with the likes of Creepy and Haunted House. This series doesn't really deserve the label "horror" especially not its second issue. Yes, there is some blood and creepiness but mostly this is surreal and really weird stuff that you wouldn't expect to find in a horror anthology. Of course, back in the 80s this was still considered horror.

It's just wonderful ideas and stories combined with great visuals!

Most readers would probably give this one or two stars less but this is one of my favorite anthology issues from now on and I just can't give it any less. 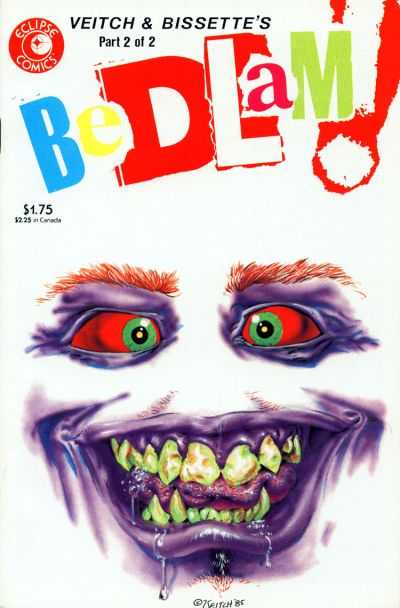