WTF IS GOING ON?

Batwoman has been one of my most beloved new characters in the New 52. JHWII/WHB's run was just awesome. I stayed because I love Kate and Andreyko's run up till now has been okay. The Future's End One Shot in particular was pretty interesting.

I watched Andreyko's interview about this in preparation, and he said it was pure chaos. And it is. But seriously, that doesn't even begin to cover it.

Last we saw, Kate was getting bitten by a sexy ass vampire and now she's in space, with a team that includes Etrigan, Red Alice, Clayface and Ragman and they're all fighting Morgan Le Fey.

Look. I get the idea behind this issue. Throw the reader into the middle of the story right away, then use following issues to recap what happening in Flashbacks while you progress the story. Its suppose to be refreshing and unique - I get it.

But here's the problem. Not only are you doing this, but you've basically up and reinvented the scenary for the Batwoman character. Its all fine and good to experiment with the direction of characters, but going from Gotham to space in 1 issue with ZERO explanation is like WTF BRO. You literally have no idea what's going on, why she's there, why she's on a team, why they're fighting Mogan Le Fey...its just pure chaos and non-sense.

I appreciate the idea, but W-T-F.

Also. This is yet another artist on the title and it keeps getting worse. I don't expect anyone to match JHWIII - his work is fan-fucking-tastic. Far and away the best artist working in the industry today imo. His work on Batwoman and Sandman Overture is godly - and his old work on Promthea is also awesome. Haun's work was not as good, obviously, but still pretty good overall. I stopped comparing it because its not fair.

But this art is just...pure mediocrity. I don't like it.

I was excited to see Etrigan too. But this was fairly disappointing. I realize the character is hard to write, but his rhymes are pretty mediocre here. I'm probably spoiled as all hell because my first introduction to the character was Alan Moore writing him in Saga of the Swamp Thing, but still...its how I feel.

Overall, this is an issue that might get better with context as we get new issues. But a stand alone, introduction to a story, its a pile of fail. What are you doing with Kate Andreyko? -.-

Other reviews for Batwoman #35 - Mystery In Space

"Mystery" Is An Apt Title 0

Within the first two pages of the issue, the reader will notice that the story is opening far from where we last left off. Batwoman is in space with her own team of heroes, and they're all fighting Morgan Le Fey for control of some kind of magic gem. The reader is given no clue as to how the story reached this point... and that's kinda the point.Andreyko makes a very risky move here by choosing to open in the middle of such a radically different scene. People don't like to be left wondering what... 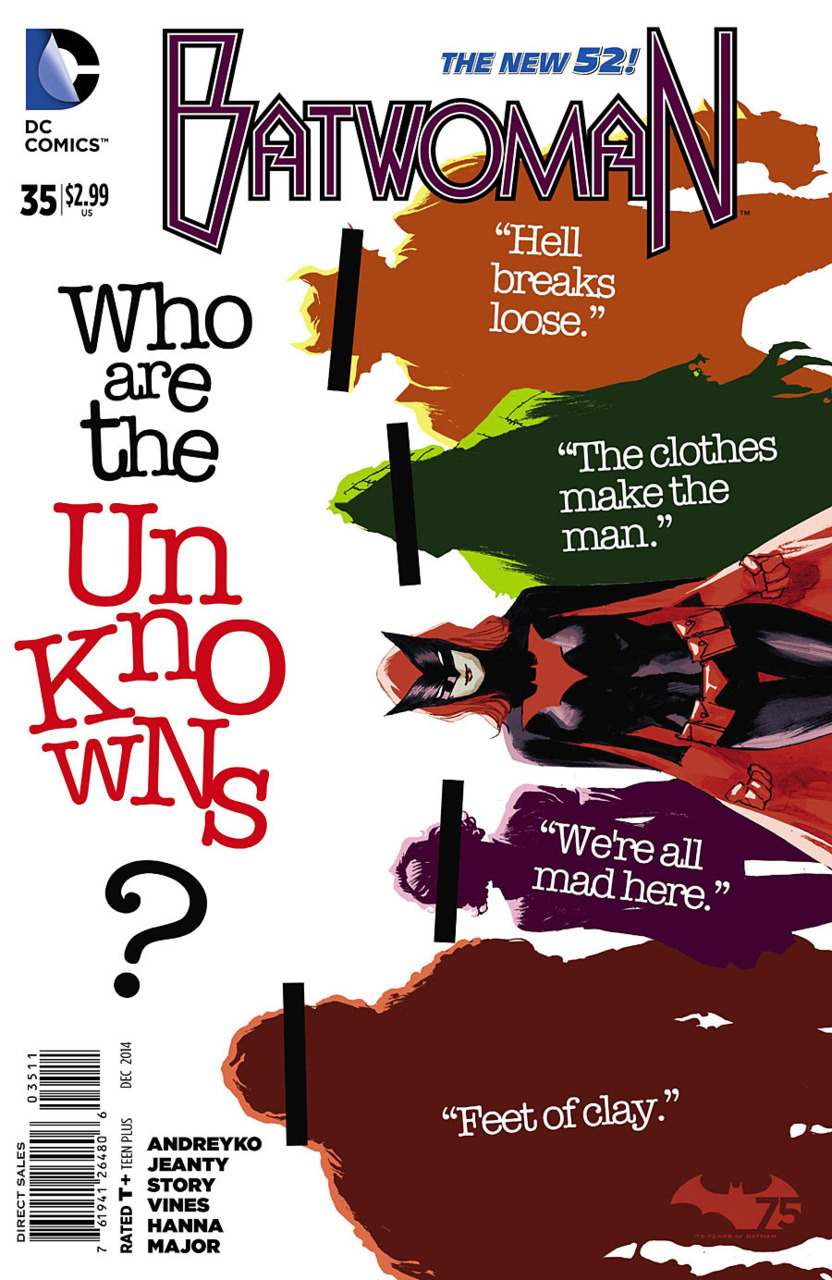