It's taken nearly a year and a half to get here, but finally, the conclusion of the first arc of Batwoman is concluding. Batwoman has been a consistently great series, and I am very excited to see how things wrap up. I could belabor the introduction, but honestly, I just want to get to the reading. Does Batwoman deliver a great conclusion to this epic, or does the story fizzle out in the end?

In this issue, Batwoman, Wonder Woman, and Flamebird take on Medusa and her forces.

Apparently, every comic this week is going to end up surprising me which is great because I love surprises. However, I'm not sure all the surprises in this issue were good.

My thoughts hit a variety of topics, so I think the best way to approach this review is simply to do it Bat Droppings style.

1. Check out that cover. It looks amazing, and as J.H. Williams III mentioned in a statement on Twitter released earlier this week, the cover for this issue was a visual echo/homage to Williams III's own Batwoman #1 cover. In Batwoman #1, Kate is standing guarded and there is a murky water feel to the image with fish skeletons swimming in the background. In Batwoman #17, (the last issue Williams III will be doing for the foreseeable future) the theme has switched from water to fire with Batwoman standing triumphant over the scene as snake skeletons writhe over the foreground. It's a nice bookend for the series.

2. It practically goes without saying at this point, but Williams III's work is amazing.

3. “But reality doesn't tear apart at the seams like cloth. Reality gets disemboweled and has its intestines pulled out.” That's a nice line.

4. The Hook plays an important if brief role in this story, and I found myself wondering about his backstory. Unless I have forgotten it, he seems to be lacking one which is odd for a fairly major player in this arc. I'm not sure he needs one at this point, but if he returns, as it appears he will, The Hood needs and origin.

5. Flamebird's conflict with the Hook was satisfying, but the changing of her codename to Hawkfire seems rather arbitrary. Also, the majority of this issue was serious, yet her, “You got burned by Hawkfire,” line seemed almost quaint and juvenile. For me, it did not fit the tone of the story.

6. It was pretty cool to see The Hook's tendrils attach to another creature. I am intrigued.

7. The Hook scene transitions nicely to Maro reassembling herself and walking to the surface. I am confused to the relevance of this scene. If anybody understands what I am missing, can you help me out? Are we supposed to know why she is not dead?

8. Kyle Abbot dies in this issue, but that didn't do much for me emotionally. I know he was introduced and had a lot of development pre-Flashpoint, but I missed those issues, and since Batwoman started, he has not had much to showcase his personality, so...meh.

Everything past here is a Spoiler until the Conclusion

9. The destruction of Medusa is one of the things that surprised and disappointed me. Using a mirror to make Medusa turn herself into stone is something that has been done many, many times in various stories. In those stories where a hero does not use this trick, they invariably use a mirror to find the location of Medusa and kill her. Both have become trite in my book, and if Batwoman had to use one of these tricks, I wish it would have been something a bit more elaborate or with some sort of more spin on the concept. All this buildup to have Medusa koed in a twenty second conflict makes her seem like a pushover. Seriously, this bums me.

10. Ceto's arrival and reaction very much surprised me. At first, I thought, “Oh, Medusa was a pansy because Ceto will be the real threat,” but then Ceto ended up seeking peace by all appearances. This was another change that struck me as questionable, but after considering, I like it. The idea that someone, even the mother of all monsters, can try to change is interesting as is the possibility that she might be lying. This sets up more potential, supernatural hijinks down the road, and I'm game.

11. Ceto is naked for many panels, yet I think this was handled very tastefully, and it appeared that Williams was doing his best not to be exploitative. I cannot imagine having a naked character on panel handled any less sexually without doing all face shots.

12. It was nice to see Kate once more be the voice of mercy to Diana. Batwoman and Wonder Woman have good chemistry. Time for a new Worlds' Finest comic with a little girl power? Again, I'm game.

13. Kate proposed to Maggie! Again, not something I expected and not necessarily a surprise I enjoy. This was way out of left field.

14. I have several issues with this one. First, Maggie and Kate have not been getting along well, and if Kate has the idea that getting married will solve their problems, I think she has another thing coming. Second, secret identities are important people! Batwoman kissing the lady police officer is something that might be noteworthy to the kids watching it, and the fact that Maggie has a redheaded girlfriend (fiancée?) with military training might help someone make a connection when police start taking statements from kids and parents. Third, is gay marriage even legal? I don't really care much about the issue, but from my (very possibly wrong) understanding, gay marriage is legal in some states but illegal on a federal level, so I find it odd that people are often going through a legal process to do this illegal thing. Our country is just very weird these days. On the flip side, marriage is more about making a lifelong commitment, so I guess the spirit is still valid regardless of the legal issues.

15. Despite my reservations, I am intrigued on where this will go. Also, my biggest complaint is that Kate and Maggie are not in a healthy state right now, so committing to it is a bad idea, yet Kate has definitely demonstrated a self-destructive streak in the past, and she has some impulsive instincts, so the idea that Kate might be making an impulsive decision fresh from the heat of battle is not necessarily out of character. We might very well see this play out as the two characters getting in over their heads by rushing the relationship. Also, Maggie didn't actually say yes, so we do not even know for sure if they are engaged.

16. Alice is coming back, but that's not a surprise to anybody. I'm hoping there will be some time before Alice becomes a big focus because Blackman and Williams III have promised that the next arc will be more grounded, Gotham based, and street level, and I'm looking forward to that. After this extremely long (if generally awesome) arc, I'm ready for something a tad more mundane.

17. It's not really a surprise that the DEO is involved with Alice either. It is kind of their business, and they have a vested stake in the Kane brood.

After considering this issue for some time, I'm still pretty happy with it. The only thing that really annoys me is the typical and rushed conflict with Medusa, and I almost dropped the issue down to an eight because of it, but I'll be merciful because I have such a soft spot in my heart for Kate and there was a lot of great stuff to balance out that one bad call. If you've been enjoying Batwoman so far, you will enjoy this issue.

Red Hood and the Outlaws #17

***SPOILER FREE REVIEW***Wow. Williams and Blackman hit another homerun in their volume of Batwoman with this issue!Let me start of with my only complaint: the climax is a bit anti-climatic for a massive arc that spanned 17 issues.Know, let me praise the rest of this awesome comic! Blackman and Williams III have been writing a masterful Batwoman. With their narration, we really get inside Batwoman's head, and are really able to understand her thoughts and feel what she perceives; the narration f...

PREFACE:This is my first ever review of Batwoman, as I have picked up this issue to get a little sneak peak of next month's new arc. I know that I have not read the whole arc, so the way I am judging this issue will be based on art, dialogue, and how the story moves from a point of conflict to its resolution. Needless to say that the cover alone could have won me over, but I am hearing great things from this title and I think it was about time I picked this up, but on to the review.ART:The art i... 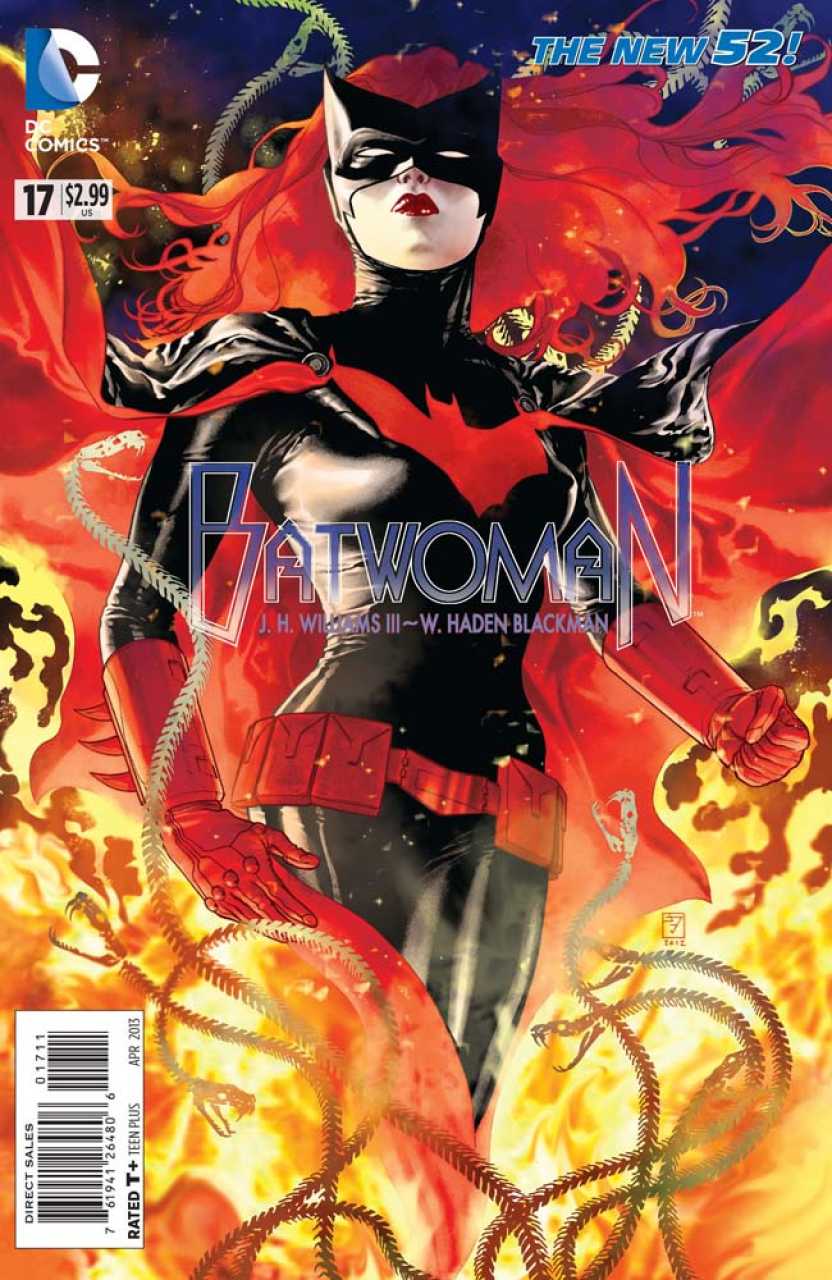 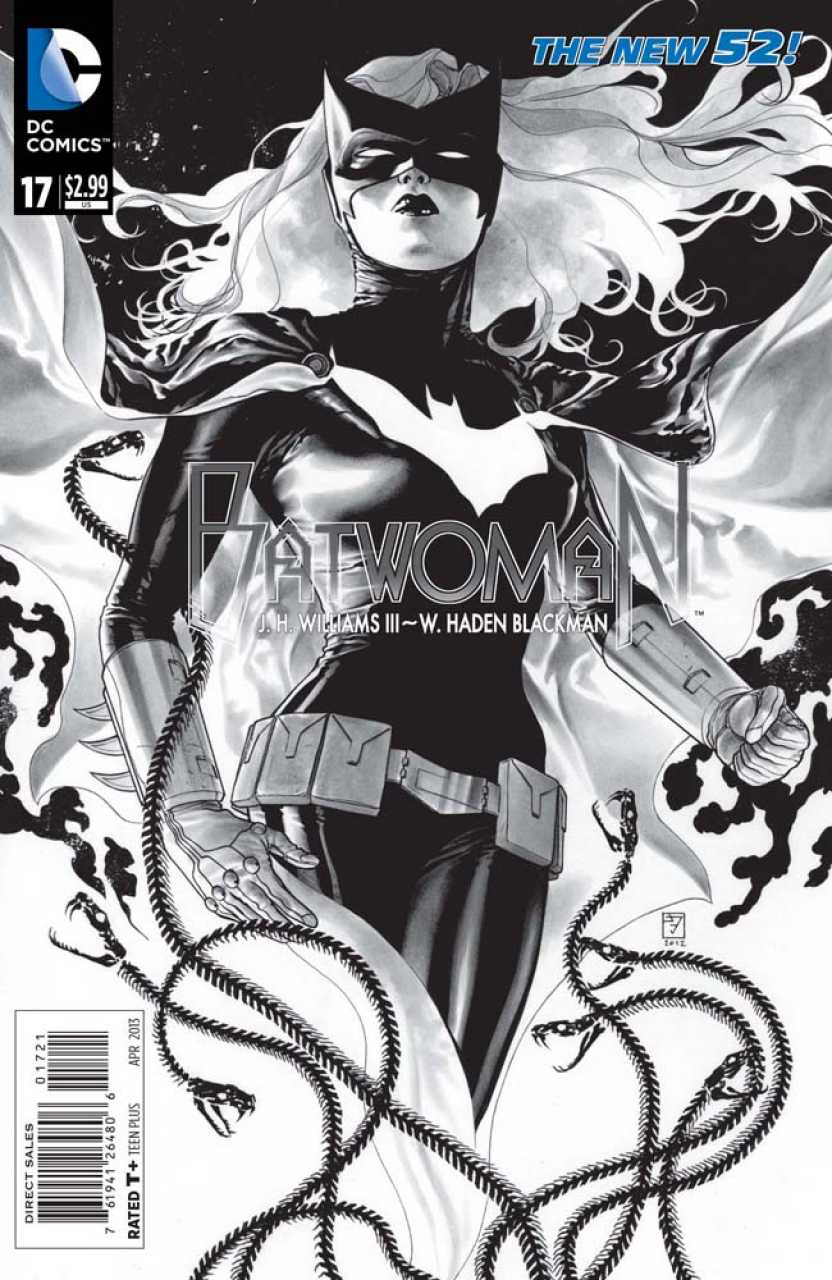