Batwing is dead! Long live Batwing! At least that seems to be the attitude encouraged by DC regarding this series. Sure, David Zavimbe was not exactly killed off, but he was certainly put to rest while he was still in his prime, and I'm completely sure if I'm willing to accept a brand new Batwing.

At the same time, Luke Fox does seem like an intriguing character. As far as we know, he has grown up without any real tragedy. He is not a character motivated by a lust for vengeance but rather he is motivated by a lust for adventure and a desire to help his fellow man, or at least this is the impression I've garnered from interviews of the new creative team, Jimmy Palmiotti (former inker for Jonah Hex and writer for Power Girl and current writer for Batwing, The Human Bomb, All-Star Western, and Ame-Comi Girls) and Justin Gray. (former writer for Jonah Hex and Power Girl and current writer for Batwing, Ame-Comi Girls, The Human Bomb and All-Star Western)It would definitely be refreshing to see a member of the Bat clan who could lighten up the stodgy and dark atmosphere.

I could probably spend another hour speculating on the potential of this new Batwing, but it's time for speculation to end and reality to take its rightful place. Does Luke Fox do justice to and even surpass the legacy of David Zavimbe or is this new and improved Batwing a feeble replacement for our retired African warrior?

In this issue, Batwing goes after the Marabunta militia and we learn more of our new hero.

Straight for the Jugular

After last issue, I opened these pages expecting to see Batman approaching and recruiting Luke Fox and Luke slowly getting involved with his first major scuffle. Well, screw that! Jimmy Palmiotti and Justin Gray do not bother with a slow build and instead make this issue an action packed thrill ride by starting six months into Batwing's career.

The issue starts with a bang and continues firing throughout. Our first glimpse of Batwing this issue features him already in a scrap with several dozen armored warriors and one armored behemoth. After several pages, the action does slow down a bit to develop Luke as a character and explain, via well timed flashbacks, who Luke is and how he got to this point in his life though many elements of Luke's past are still shadowed,and this is an aspect of the story which will no doubt continue to be unveiled for many issues to come. Even during the more plot based moments in this issue, action is never more than a page away. The entire back half of the issue is an extended fight scene, yet we learn much about Luke's thinking and fighting style throughout, so it is not a brainless slug fest as often occurs in these sorts of extended battles.

Generally, I like action to be more balanced with narrative, but in this case, I respect Palmiotti and Gray's approach. For one thing, they are constantly delivering narrative even as the fisticufffs fly, so the action is far from one dimensional. More importantly, Batwing is a book in danger of being canceled, and if the new creative team cannot grab a following quickly, then Batwing will soon be in the scrap heap, and if I can figure that out, I'm sure veteran writers Palmiotti and Gray have figured out the same thing, and if they think that a stronger focus on the action will lure new readers, then I'm willing to play along though the pacing will need to slow down at some point.

I had lots of doubts nagging me on this series but most of them were alleviated.

Will Luke blend with the Family dynamics or will he fit awkwardly with the established players?

Luke seems to blend quite nicely at least with Bruce. He even managed to wrangle a smile out of the Caped Crusader.

Is a tech based enemy really the way to go for a first issue?

I'm still a little cynical on that one, but it turns out that the tech baddies are more cannon fodder while the real baddie is flesh and blood, and that seems to strike the right balance for the series.

Does the dialogue feel fresh or will it be stilted as it was at times in Batwing #19?

I did not feel like the writers were completely comfortable writing for all the characters in this issue, but the dialogue never felt bad.

Will the art team deliver?

Yeah, I felt like they did a good job. Eduardo Pansica. (former penciler for Wonder Woman and current penciler for Batwing) did an especially good job in that he was able to sell even the more ridiculous concepts like some of the crazy looking villains. The rest of the art team also did an admirable job.

1. The first think I noticed when I looked at this issue was that the cover had changed. A quick googling showed that the sketch for the cover had not actually changed, but the color scheme had been altered. The new version is much better with the red of the villain in the background contrasting with Batwing's costume better than the gray of the original cover design.

2. Another aspect of the story that I was skeptical of was Luke's strained relationship with Lucius Fox. Haven't we seen enough strained or broken family relations in comics? However, the actual issue did a lot to sell me on the concept. Lucius is not necessarily a bad father nor is Luke a particularly bad son, but Lucius is a perfectionist and expects Luke to conform to Lucius' version of perfection whereas Luke wants to travel his own path. This could be a good dynamic if handled correctly.

3. I was impressed with Palmiotti and Gray, and in a way disappointed in past writers, that they succeeded in creating an environment that felt uniquely African much more successfully than did writers for most past issues of Batwing. There were lots of little touches that gave this impression such as the names of Lion-Mane's wives, at least two of which were named after African goddesses.

4. Batwing mentions being trained by a Sensei Tsunemoto. Bruce was shown to be trained once by a Mater Tsunetomo. Coincidence or significant?

5. The ending questions setting up for the next issue felt like they could have been ripped off an episode of Batman '66. “Will this be the end of Batwing?” No. I'm pretty sure there are solicits out for the next month.

The issue is a bit more action centered than I generally prefer, and I'm not yet completely sold on Luke as Batwing, but this is a promising start that delivers a very big bang for your buck, and it has some substance underneath the flash. I'm not yet convinced that this new ride will last for the long haul, but it's made a noteworthy debut. If you are invested in the Batman mythos, you should pick up this issue because this will definitely be a character who make some waves at least in the short term and perhaps for decades to come.

Luke Fox is the new Batwing! Didn't want to say that about the last issue, but you're supposed to know that coming into this issue. There's a lot of potential with that choice, given who his father is, and his connection to the Batman Family. It also explains his natural intelligence, which is actually a bit of a point of conflict with his father, and it's refreshing to see a strained father/son dynamic where both actually have a genuine point. Neither of them is really the 'bad guy' in this si...

Cover &amp; Solicit - 4/5Would I pick-up or buy the comic based on the solicit or cover alone?Are the alternate covers appealing?Does the solicit and cover portray what happens in the issue?Do I like the artist's style on the cover?Art, Colors &amp; Inking - 4/5- Weighted DoubleDo I personally like this artist's style?Does the artist stay true to the characters appearance?If there are multiple artists do they blend well and not disturb the reading experience?Does the coloring/inking blend well ... 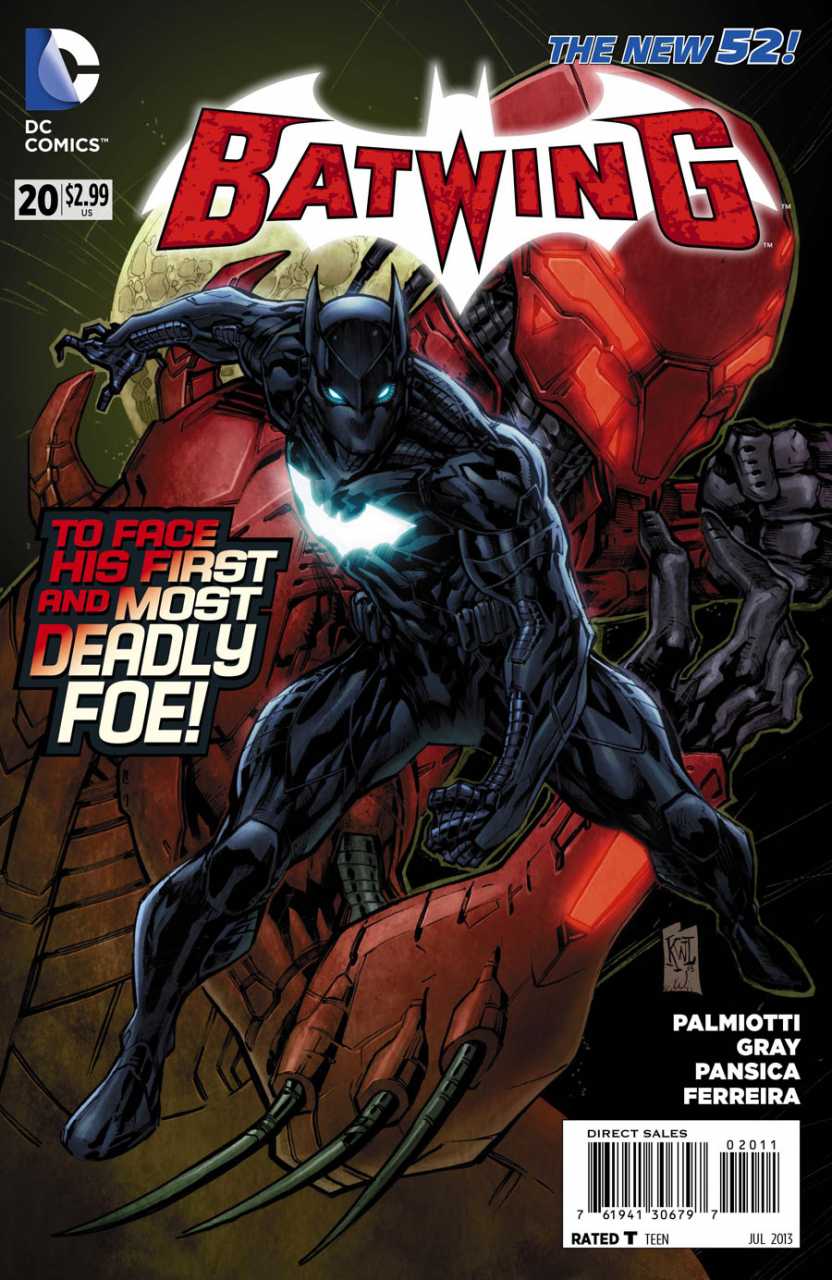