The cover credits Fabrizio Fiorentino with the interior art, but it's actually done by Allan Jefferson. Jefferson does a damn fine job, I especially love the way he executes reflections and symbolic shadows. David almost always had bat ears in his shadows, and it works really well.

This title was always one I WANTED to hate. I was bitter that of the two brand new Batman Incorporated members it was Batwing given a new series over Nightrunner. But the opening arc was mostly excellent, Ben Oliver gave us unique and fitting artwork, and Winick was telling a great story. But after that it started to go downhill. It felt like Winick was getting lazy, just going through the motions. Batwign wasn't 'bad' it just wasn't particularly engaging. It didn't really grip me like it used to.

But Fabian Nicieza has injected new life into this series, starting us off with a damn fine jumping on point for new readers that still utilizes long running thematic ties to the entirety of Winick's run. He finally puts the focus on something that has simply been an environmental factor on Winick's run, the deep rooted corruption of the police force. Nicieza brings that to the forefront and uses it to really shape the different setting this has from Batman. The corruption is so deeply rooted, and yet not 100% taken over. So David AND Batwing are running a thin tightrope on two fronts as he fights to burn this cancer at the very roots. This is exactly the kind of story this series needed, it really cements the setting in a more rounded fashion, and highlights how different this is from the rest of the Batman Family.

There's a lot more inner monologuing from Batwing than there was before, but it definitely works very well. It has a smooth flow that works with the rest of the pacing, and is another significant factor in crafting the core themes Nicieza is tackling, as well as making this a great place to start off. I was a little disappointed in Matu's reluctance on this mission, it seemed a little out of character for him, but David did kind of need a foil for this story. I also loved how we got to see more of how David manages dual identities, as well as the more unique attributes of the suit. I especially loved the way it can fight without David and project a face to give the illusion that there's a person inside.

There were a few minor kinks and hiccups, but overall I'm incredibly pleased with the way it appears Fabian Nicieza is really turning this series around, moving it back up in quality to where it began. He's taking a new approach that actually builds off of what Winick set up, and reveling in the differences without being overt about them.

Other reviews for Batwing #16 - A Blind Eye Sees Red

A Blind Eye Sees RedTo see this review with images, Click Here.Batwing started strong, but it has been struggling ever since. The last two issues from writer Judd Winick felt like he was just going through the motions. Luckily, help arrived in the last issue in the form of new writer Fabian Nicieza. I loved Nicieza's work with Robin and Red Robin, so I have some high hopes for his work with Batwing, but the reality of Nicieza's more recent run on Legion Lost also bears some consideration since t... 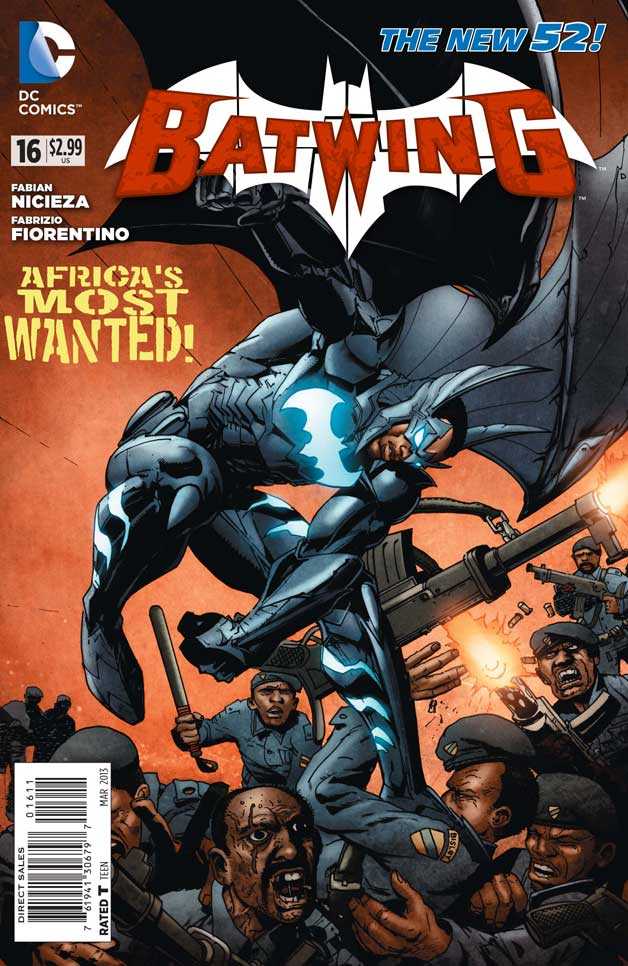