This cover's really a letdown after To was on quite a roll. This one is basically the same as the previous one in concept, with Batwing on the ground instead of in the air. And he's back to taking up a bit too much space.

I love Judd Winick, he wrote the AMAZING Generation Lost and I adored his intense and deep Catwoman run in the New 52, but since Night of the Owls Batwing was starting to get a little stale, stuck in a rut of so-so quality. Stepping in to finish up this arc before a true new direction begins, we get a first look at the new team of Fabian Nicieza and Fabrizio Fiorentino; and it gives me hope for this series' future to pull itself out of mediocrity.

It's interesting, usually I'm a huge fan of Marcus To's artwork, and a harsh critic of Fabrizio Fiorentino; but To's work has a very all-around quality to it that actually made it a bit off-putting for this kind of series; while this time Fiorentino not only gives far better work than I'm used to seeing from him, but also has a nice grainy quality to it that really fits the unique tone. It feels like his style is somehwere halfway between To's recent style, and Ben Oliver's style from the beginning of the series. I'd still much prefer Oliver return, but honestly I think Fiorentino was one of the best choices for this series.

Overall this issue was a little rushed, which is weird because this story arc was dragging a bit at this point, each new encounter with Father Lost being essentially identical to the last. But Nicieza manages to provide a bit of an extra spark to the dialogue, and some of the development of the events that places this one a bit above the recent issues. There's not enough deeper plot or hidden mysteries to Father Lost, but Nicieza was coming in to finish off someone else's arc before he could start his own.

Yes, this is the same score I've given a bunch of these so-so issues, and it mostly fits in with those, but that's because Nicieza hasn't truly started his run yet, just cleaning up the unfinished remains of Winick's run. There's a lot of nice stuff here that gives me a lot of hope for the next issue, it just wasn't enough to save this issue alone from the same trap the other recent issues had been falling into.

Other reviews for Batwing #15 - Lost and Found

Lost and FoundBatwing is a book with a whole lot of potential and not a whole lot else going for it right now. Just this week, I started reading the original run of DCNU, “The Kingdom,” and it seems to be a very solid and entertaining story, but this current “A Hard Turn” story arc focusing on Father Lost? It’s just not that good. There is hope, however. The old writer was Judd Winick, but he has moved on to other projects and handed the reigns over to Fabian Nicieza, a writer I very much enjoye...

Cover/Solicit - 4/5- Would I pick-up the comic based on the solicit/cover alone? Are the alternate covers appealing? Does the solicit/cover portray what happens in the issue?Art - 4/5- Do I personally like this artist's style? Does the artist stay true to the characters appearance?Colors/Ink/Lettering - 4/5- Does the work blend well with the artist? Is the coloring/inking enjoyable and easy to distinguish what's happening? Can I easily read the lettering?Layout/Flow - 4/5- Does the layout of the... 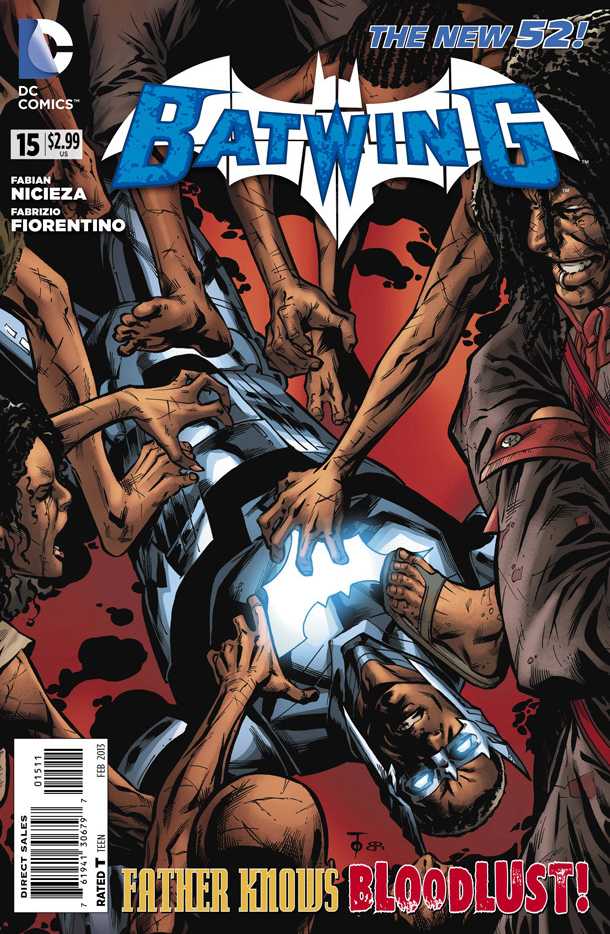