I have been enjoying this series and it has been much better than the first Batman, Incorporated series. I have enjoyed how this series has explained more about Leviathan, and how due to Talia al Ghul leading Leviathan, her son Damian Wayne has been more involved in the series.

This issue shows what the world will be like if Damian becomes Batman, and how he will destroy Gotham City. In this story Damian, now Batman, with the help of Barbara Gordon (who's once again wheelchair bound) attempt to save Gotham from an infection of Joker gas.

This was an amazing issue, and when I heard that this issue would be taking another look at Damian's future as Batman I was very excited, and I wasn't disappointed. Grant Morrison has done an amazing job at continuing stories he's shown in pre-New 52 comics, and how he's managed to make them new reader friendly. I loved how he made the story transition from the present to the future, and how he used Damian's current, and future emotions to do so. I also loved that due to this being set in the future he doesn't have to worry about the changes that happened since the New 52 effecting his story. I am mainly talking about Barbara being in a wheelchair once more. The New 52 established that Barbara's paralysis was only temporary, so it is interesting to see that she will once, again become paralysed in the future. I've also liked how Morrison has handled Damian, a character he essentially created, throughout his work on Batman, and love how he's shown the changes Damian has went through.

Chris Burnham's art is truly beautiful. When I first saw his art during the previous series of Batman Inc., I wasn't initially too keen on it, and thought it looked a bit messy, but after seeing it again throughout this series I have changed my mind and really enjoy it. Burnham's art suit's this series, and the grittiness of it, gives the series a dark tone to it. I've also loved how he's incorporated some classic moments in Batman's history into his work, and think it shows the history in Batman perfectly. The way he draw's the current and future Damian was probably the best thing in this comic and I liked how you can tell that they're the same person due to the expression on their faces, as the story goes from the present to the future. The way he drew the burning Gotham was also brilliant, and the way he showed Damian coming out of Arkham Asylum to a burning Gotham on the cover, was genius.

Seeing Damian as Batman again was nice and I liked how it's hard to tell if he's Gotham's saviour, or it's demise. I did like how this story showed that Damian wanted to protect Gotham and how straight away we see Daminan saving a child. I also loved that we get to see Damian's Batcave again, as I loved this in Batman #666. I also liked how we get to see some of the trophies Damian has kept once more. It was also nice to see that Damian still had his cat Alfred which was named after Bruce's butler, as I liked this in previous issues featuring the future Damian, and like how despite everything he's been through he still remembers all of Bruce's Bat-Family, even Alfred.

The present Damian's reaction at the start, and the end of this issue was brilliant, and I loved how we get to see some innocents shown in Damian. When you see Damian going about all confident in the way he talks, and being raised as a killer, it's easy to forget that deep down he's a child, and has the same needs as a child, and I liked how this issue showed that. I also like how Damian wants to continue living with his father and how he has grown to love Bruce.

Will Damian eventually kill Batman? It's been asked in a previous issue, and this issue asks it again. With the future being able to change easily, especially if someone has seen it, it questions if this sequence showing Damian over his father's dead body will actually happen. The progression of Damian's story in the present will be an interesting factor in deciding if this will happen or not, and it will also be interesting to see if Batman can prevent the future from happening.

Doctor Hurt involvement in this story was also very interesting, and it was nice to see him once more. After all Hurt has put Bruce and his family through during Morrison's run it's nice to see that he won't stop once Bruce is dead, and that along with Talia he has a huge part in Damian becoming Batman.

There was a sequence near the end of this issue that particularly interested me. Nearer the end of the issue, once Damian figures out what's going on he returns to Barbara, attempting to save her from the infectious Joker gas. He arrives too late and Barbara has been infected, and eventually shoots Damian (which is the sequence that interests me). When Barbara shoot's Damian you can't help but think of when Joker shot her. The way she shot him was very similar to how Joker shot her, and even the way she was looking just before she shot him reminded me of how Joker was standing in the doorway. The similarities were nice and it goes to show that even Barbara can be turned into a similar monster as the Joker.

This was a brilliant issue and the best in the series so far. Morrison has produced a truly outstanding series, in Batman Incorporated, and besides issue 0 they have all been exceptionally good. I would highly recommend this issue, and it is a brilliant place for newer readers to join.

Other reviews for Batman, Incorporated #5 - Asylum

SPOILERS!!!I picked up this issue on a mere whim I’d heard good things about it and the Batman #666 the issue where this future first appeared also I’d heard good things about the series in general also the story was said to be really dark and gritty my favourite type of story.PlotBatman is talking to Damian about how Talia his mother has been planning everything with him becoming Robin and how she wants eventually for him to become Batman and then everything will fall apart. In the future Damia...

AsylumTo see this review with images, click here.Batman Incorporated has been a good series that seems to become better with every new twist, but at times, it seems to get a little lost in its own mythology. Morrison does not slow the pace of his story to brief the uninformed reader. Despite this arguable failing, Batman Inc.’s last issue delivered an amazingly action packed issue which both stalwart Morrison fans and relative noobs could appreciate. Unveiling several surprises, last issue showe... 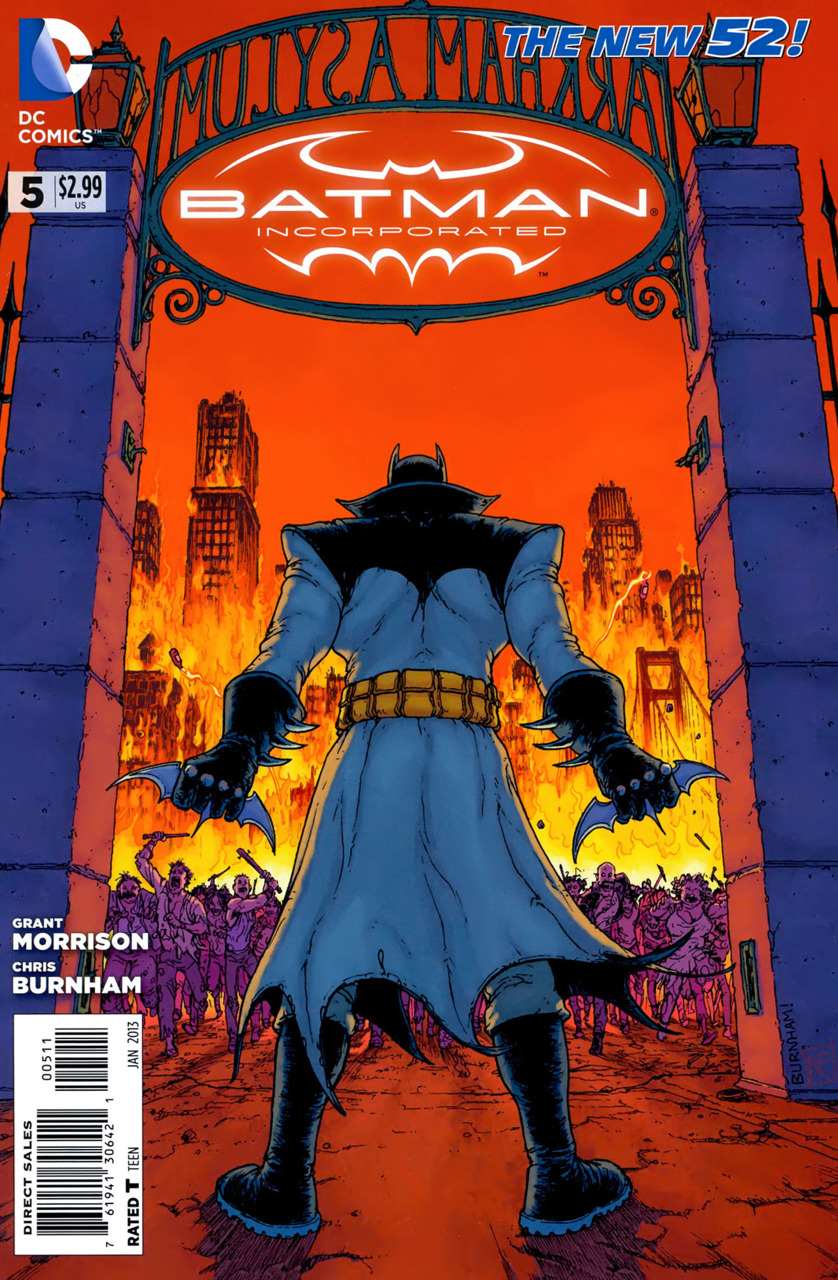 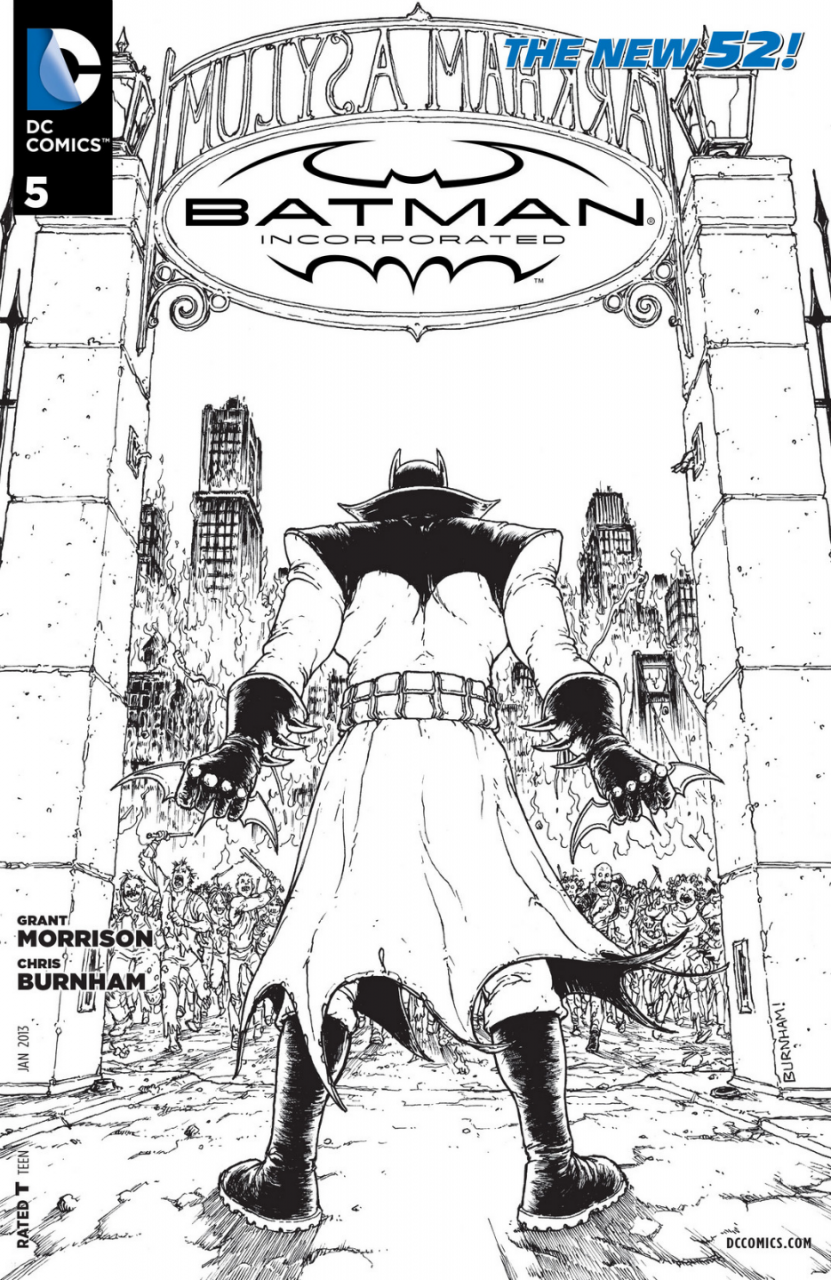 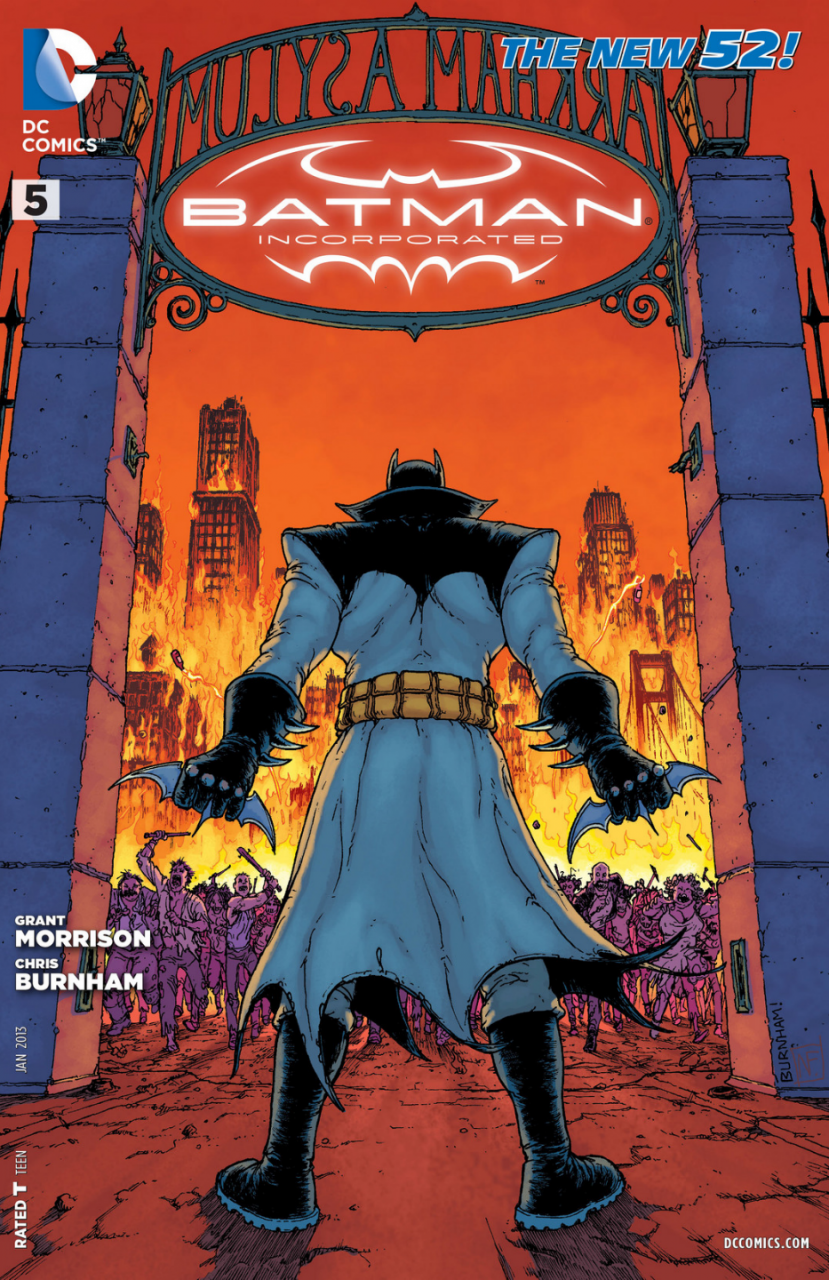 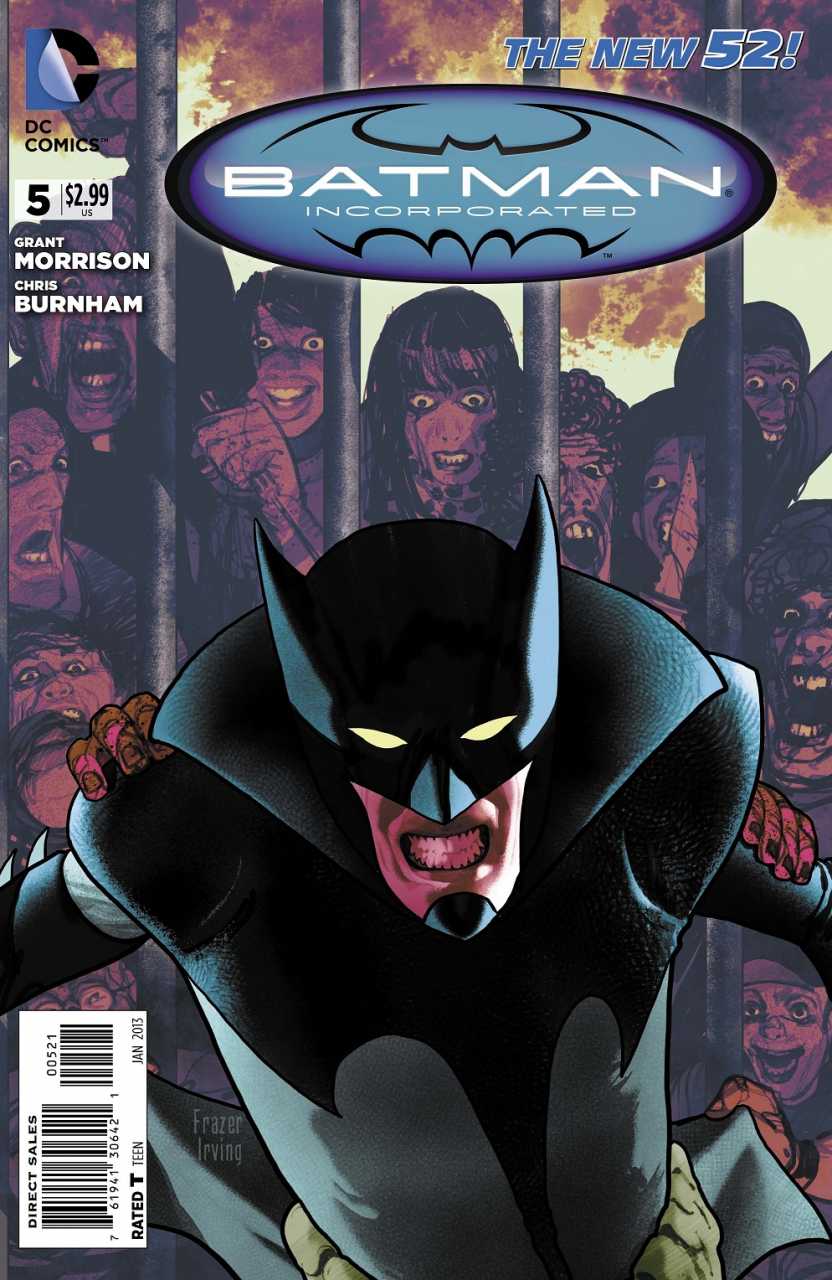 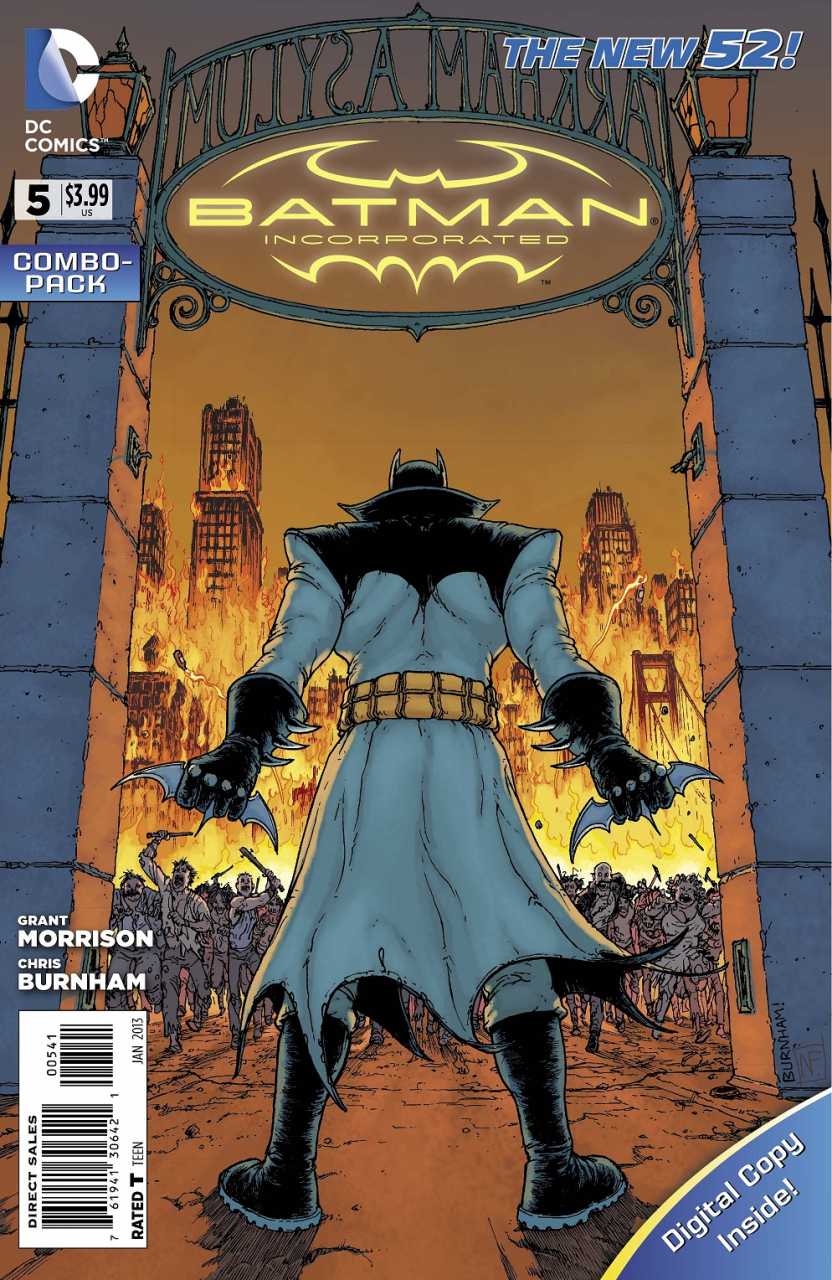