Normally when I introduce a comic, I talk about what has been going on previously in the series, but since this is an annual, I really have no idea what to expect. Sure, I could cheat and read the solicits, but I like being surprised. We know this issue cannot be taking place chronologically with the regular series since the last time we saw Damian, he was being dragged God knows where by Joker, so unless this issue features forty pages of Robin waiting for Batman to show up so we can find out what is under the darn platter, I'm guessing this issue probably took place earlier. The cover is also interesting having Damian wearing his grown up Batman uniform even though he is still a child, and unless I am mistaken, this cover is an homage to an earlier future Damian story. Anyway, I'm prepped and ready for this issue. Does Batman and Robin Annual #1 deliver a win or a fail?

In this issue, Damian sends Bruce on a worldwide scavenger hunt down memory's lane where the world's greatest detective reconnects with some secrets from his parents' past. Meanwhile, Damian dons the cape and cowl to guard Gotham while Bruce is gone.

This is by far the funniest comic I have read in a long, long time. That is including the recent Li'l Gotham comics. Tomasi, the writer, does an amazing job keeping the serious tone that the series had during the Nobody run and yet putting the characters in scenarios that lead to huge laughs. Sometimes when a writer tries to be funny, he or she sets up some ridiculous situation which might be humorous but ruins the serious nature of the comic, but here, the humor comes from the personalities of the individual characters, and that takes skill.

The dialogue really shines in this issue. Some people have pinged Tomasi in the past losing Bruce's voice and making him a little bit of a ham, but in this issue, he sounds just right. Furthermore, if you love those tender and funny moments between Alfred and Bruce, then you will love this issue because it is jam packed full of those moments. I am frustrated because I want to give examples of some funny lines, yet at the same time, they are often context specific, so I cannot really do them justice with little snippets, and besides that, I do not want to ruin them for you when you read them for the first time. Just take my word for it; this issue is hilarious.

Seeing this story slow down a little and really focus on personal moments for all the characters rather than just the typical “Action, action, action!” found in many comics made me really wish we could get a longer format for more stories. I suppose that is not really possible due to artistic constraints, but at least Tomasi takes advantage of his the annual here and takes plenty of time to develop all three characters featured in this issue, Damian, Bruce, and Alfred. With Damian, we get to see him develop in terms of compassion and altruism, and the poor kid has finally learned how to open up and share. Similarly, we get to see Bruce struggle with how to be a good dad which is something that has strangely appeared very little since his discovery of Damian's existence. In addition to fathering woes, Bruce does get some very nice gifts from Damian which force him to reflect. We almost never see any development from Alfred which is one of the many reasons this issue is such a treat. Alfred decides to reconnect with his past acting buddies which leads him to consider what he might have missed while in service to the Wayne family.

The art looked really good in this issue without a bad panel in the nearly forty pages. Ardian Syaf (previous penciler of Batgirl {2011}) handles the pencils, and he does a great job. Expressions are very important in this issue since so much of it deals with peoples reactions and interactions, and Syaf presents them well. The inking looks good, and the colors are quite striking and vivid as well, but I did feel like the colors did not always blend well from page to page. There were some instances where the art went from such a dark tone to so incredibly bright that I actually thought there might have been an artistic change in the middle of the issue, but apparently, colorist John Kalisz (former colorist for JSA and Detective Comcis {2011}) just likes to work like that. It's not bad in any way, but it did surprise me at times.

I did have two little complaints on the issue. First, Batman mentions, “Taking a page from the Mr. Freeze handbook,” yet I did not see anything in his actions that explained what he meant by that. It seems like there might have been one other piece of dialogue somewhere in the issue I did not follow. (Spoiler) Second, it is never explained how Damian new of so many things from his grandparents past. There are certainly plausible explanations, but none were ever made.

This issue is hilarious and heartwarming. Plus, it has a little action. There is no reason not to love this issue, and I fully recommend you pick it up.

Other reviews for Batman and Robin Annual #1 - Batman Impossible

The Bats in the Cradle and the Silver Spoon 0

Batman and Robin Annual #1 - Batman Impossible by the_mighty_monarch on February 01, 2013

When I first saw this cover, I knew I was in for a treat. Damian in a version of his future-self Batman costume scaled down to fit his current age? Or rather, what must be a prototype for what will perhaps one day be his Batman costumes. Either way, I love it.Ardian Syaf's artwork looks even better than any issue of Batgirl he's drawn. Whenever Mini-Batman (Damian) is in action, running, swinging, fighting; he's so full of vibrant energy; and the panel layouts during the fight scenes are unique,...

Not too bad there Peter 0

Batman and Robin Annual #1 - Batman Impossible by pathtales on January 30, 2013

Disclaimer don't take what I say too seriously or for 100% accuracy. Still read the thing.WHAT UP??? Alright, so let's just go right into it. The comic book straight up starts with a pissed off Bruce beating up a crying nerd.Ok, so it isn't that bad. Said nerd stole military stuff and set Gotham on fire and had to face the Batman. But you got to feel for this guy.So Batman takes a batnap and then Alfred is all like "Yo, wake up" and Bruce is like "Five more minutes mom!" but Alfred's just "Dude,... 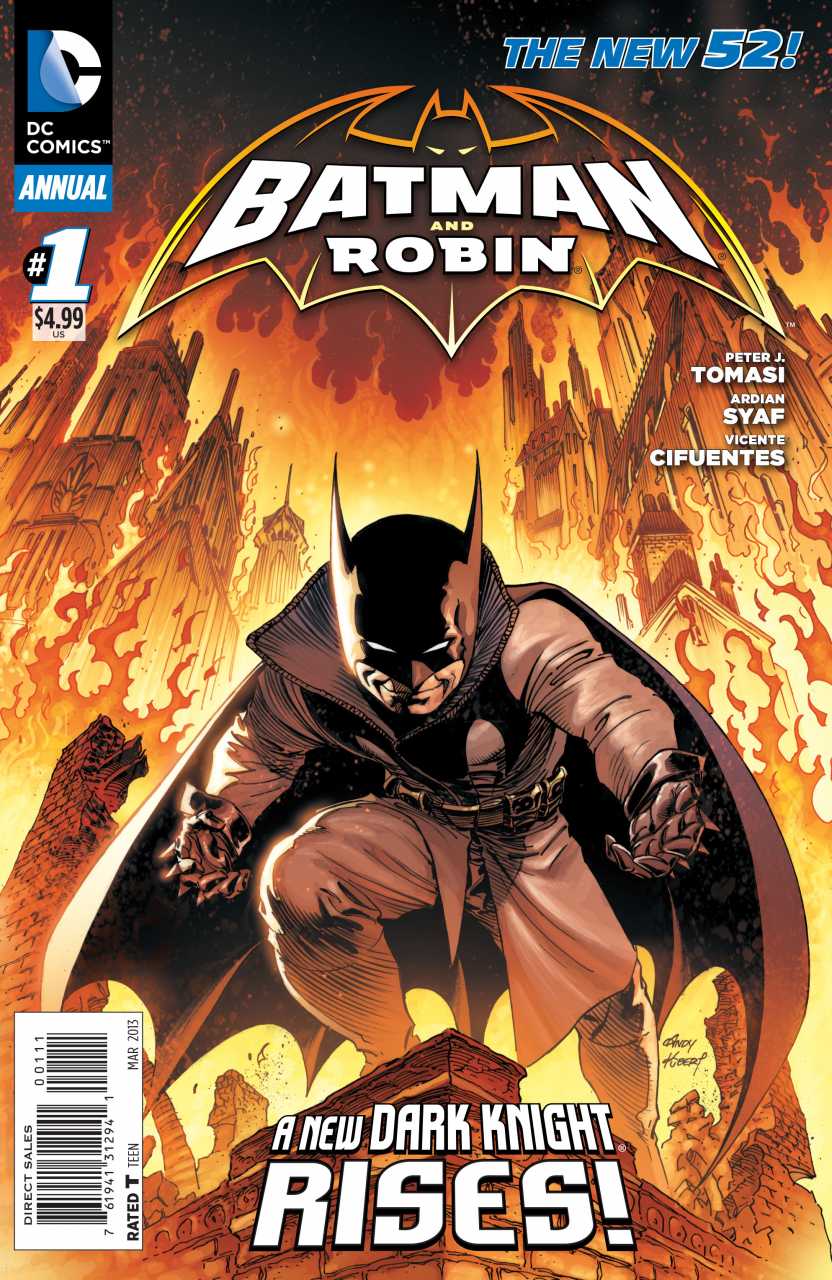