I have been thrilled by the last couple of issues of Batgirl, but I was a little disappointed when Babs turned the tables on Joker at the skating rink last issue only to be defeated by a cheap Ace Joker had hidden up his sleeve. Now, it looks like there are wedding bells and amputation gauze in Barbara's near future, and I can't help but wonder if Simone can pull off a satisfying finish to this arch which is more pleasing than the near resolution found in Batgirl 15. I suppose its time to find out. Do Batgirl and and Joker live happily ever after, or is this marriage doomed to an ugly seperation?

As I feared, this issue did offer a slightly less satisfying conclusion to the tie in than was presented in the last issue, but it was not so much an issue of poor writing as it is the limitations imposed by the crossover. First, we know Babs is not going to succeed in taking Joker down which makes all these stories rather limited. Second, this issue ends exactly as you would expect if you have read Batman or Batman and Robin, and I am already tired of the hint/threat of the platter.

(Spoiler) Ignoring the limit imposed by the arch, the only problem I had with this issue was the appearance of James Jr. His whole interaction was confusing. First, he shows up to save Batgirl. Now, I have not yet read The Black Mirror, but I have been assured by those who have that James Jr. is a remorseless killing machine, so it makes little sense for him to care about his family. Nonetheless, I suppose this could be a reboot or perhaps James is just going with the whole, “Nobody gets to kill the her but me!” idea. However, the scene is still confusing for Barbara trusts James Jr. which is another thing that would never happen according to The Black Mirror, yet again, you could say it is a reboot change or that Babs was desperate and grasping at straws.

(Spoiler) What really confuses me comes later. James drugs Batgirl, which is not surprising since he is evil, but he says he has to save his mom and then tries to make a deal with Joker to spare his mother's life. When Joker tries to kill James Jr., James throws a grenade into the midst of the chapel, and we are not shown what happens to James Jr. beyond this. I though this through several different ways, and I don't see how James' actions make any sense. If James wanted to save his mom, why didn't he just save her from the skating rink? James is clearly a formidable guy, so if there were just a few guards there, why not take them out and save his mom? If there was overwhelming force at the rink that James could not counter, then it might make sense for James to try to deal, but how would he know if Joker truly released Miss Gordon even if the Clown Prince agreed to the deal? Perhaps he was hoping to kill Joker and his thugs so that he would not be able to call in the kill order to the guards, but that still does not remove the guards at the rink from the equation. The only thing that sort of makes sense is if there was overwhelming force at the rink which James Jr. could not counter, so he tried to make a deal with the Joker trusting that Joker would be true to his word, but when Joker threatened James Jr., James threw the grenade just as a cover for his escape, and James was back to square one without any way to save his mom. That could make sense, but it is a bit convoluted and really needed to be clarified in the story.

Stand Up and Cheer

Counterweighting these critiques is a lot of awesomeness specifically in Barbara's character development. I said in my Batgirl article the other day that Babs really needs to get over her victim mentality, and it appears that she took a big step in that direction. As soon as Babs has an opportunity, she tears into Joker's henchmen without hesitation or exaggerated amounts of mercy. To quote Barbara, “I have been afraid of this nightmare forever. Cold sweats. Sleeplessness. Depression. I am done being afraid.” Yes, yes, yes! Please let this continue! Many fans of Simone's portrayal of Batgirl have touted her victimhood as a good thing, but I maintain that victimhood is only heroic if it is a state you are striving to overcome rather than a state in which you dwell, and Babs does not wallow in this issue and speaks as if she is done acting like a victim.

Another issue that I have seen some Simone fans tout as a great leap forward for Babs' character is the way Barbara's victimhood allows her to be sympathetic to villains which have suffered as victims themselves such as Mirror and Gretel. Though there is certainly a time and place for mercy and commiseration, I personally do not feel that predators who use their pain as justification to hurt innocents have any mercy coming to them. Granted, there are those who believe in collective guilt; that every crime is just a symptom of a corrupt society, and therefore all people are equally guilty of the crimes of any one individual, and if you believe in that sort of collective guilt nonsense, then I suppose having a heroine capable of administering kindness to monsters is admirable, but for someone like me who believes in personal responsibility, I only want to see mercy bestowed in moderation to those that seek redemption, and I want to see predators get their faces beaten to a pulp.

I have no idea where Simone stands on this issue, but Batgirl definitely seems to be moving more towards me view than the former by unleashing a tide of fury against Joker and his minions. When one thug begs for mercy, Babs responds, “Mercy. Sorry, I'm fresh out.” Good going Babs. I hope to see this side of you much more often.

Many have complained that the tie ins to Death of the Family have been to formulaic, but like good techno music, Batgirl manages to take the general theme and add a little variety to it. Joker takes the whole Bat King angle and brings up the idea of political alliances through marriages (unless I am mistaking the implication of the story) which is an an angle I did not see coming. This tie in also scores points for being the only branch which actually gives an explanation for how Joker intends to get rid of a member of the family. As was mentioned last issue, Joker comes back to the idea of taking off Babs' limbs and locking her in the basement which is a truly disgusting and horrible thought befitting of Joker.

The art is good this issue which is standard for Batgirl. Thankfully, this issue is devoid of the weird lens flare effect going on in issue 15.

I don't think anybody could decipher writing by watching a pencil's movement.

I know it is hardly original for a villain to wield a chainsaw, but I thought it worked well for this issue adding an air of constant threat and the promise of dismemberment to the scene.

A chainsaw was also featured in Batman 16. Could it be the same chainsaw, and if so, what is the significance?

We get the platter again. This time, we get hints of blood on the inside which makes it even more likely that it holds a head. Perhaps Alfred or Babs' mom was beheaded with the chainsaw.

This is another very good issue, but just slightly worse than the last because of the predictable ending point and the unclear motives of James Jr. Still, if you are a Batgirl or Joker fan, pick this issue up.

I have really started to love this series, and am happy I picked it up during the Death of the Family crossover. I hope that this series will stay as good as it's been during this crossover, as I've really enjoyed it, so much that I've decided to continue getting the series.PlotThis issue sees Batgirl, and Joker's wedding take place but it doesn't quite to Joker's plans, especially once James Gordon Jr. gets involved.ReviewThis was a great issue, but a bit of a disappointing ending to the Batgir... 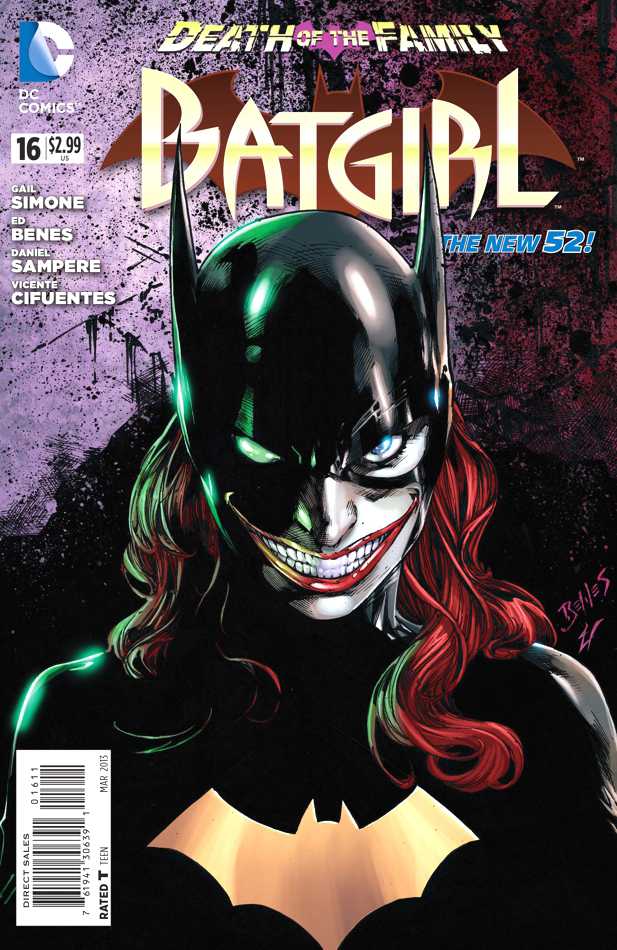