I'm sick of bailing Earth's Mightiest Zeroes out of trouble...

Avengers/Iron Man: First Sign collects the moribound issues of The Avengers and Iron Man, most of which are all written by Terry Kavanagh, one of the worst people to ever write comics. To the unfamiliar, Terry Kavanagh was an editor at Marvel Comics who for some reason decided he could write. His name is attached to all the worst parts of the worst parts of 90s comics. His name is attached to The Clone Saga, Onslaught and The Crossing. He's the man who wrote the issue of the Clone Saga where Peter hits Mary Jane. He's the writer who took over the entire 2099 line by himself and instantly killed the line after 2 issues of Spider-Man 2099 (not an exaggeration!). He is not a talented writer and is nothing but poison for a book. So naturally, Marvel decided to package a trade collecting some of his work hammering the final nails into the coffin of two of their major books just before they were relaunched as part of Heroes Reborn.

Okay, Kavanagh's name is attached to most the issues in this collection, but there are a couple of issues by Ben Raab and Mark Waid. Y'know, people who are actually writers. This collection is geared around the Avengers "First Sign" crossover. Never heard of it? Don't be surprised. It was Kavanagh's thing. After The Crossing had basically put the Avengers through the wringer, Kavanagh decided to immediately follow it up with another crossover. The premise was to get the original Avengers back together. Except his idea of the original Avengers was Cap, Iron Man and Thor. And he had just being involved with a project which made Iron Man into a full-on villain and had killed him and replaced with a cool and hip teenage version. Likewise Captain America had just gone into exile and quit being Captain America and began operating as just "Steve Rogers". And Thor had just lost all his God powers and was sensibly bonking the Enchantress. So, straight away, you can see the initial premise of the crossover is already falling down in it's very basic planning stages. Despite that, somehow, Marvel still decided to run with it and I don't really need to go too in-depth about how terrible it gets from there with a villain wanting to stop the stars from shining on New York City. It's not surprise that First Sign crossover turned out to be utterly rubbish without a single thing worthy of any sort of compliment. It's not an Avengers story and it's not an Iron Man story. The crossover is told across Kavanagh-penned issues of The Avengers and Iron Man as well as an issue of Mark Waid's Captain America and William Messner-Loebs Thor. Those latter two issues are two of the better written comics in the collection and that is not anywhere near a compliment. They too feel like books on their deathbeds with little direction, motivation or worth. If you like Waid's Captain America run, unlike me, then this is the only place to get that one issue. It's not worth it. The Messner-Loebs Thor run is generally forgotten, while it's not terrible, only thing of note is the Enchantress relationship. Messner-Loebs writing the last issues of Thor is pretty much just a thing because Warren Ellis was meant to be writing Thor but got bored after 4 issues.

The trade also collects the subsequent issues of Avengers and Iron Man up until the Onslaught tie-ins. The Iron Man issues, all of which star the cool and hip young Iron Man are entirely written by Kavanagh. They are abysmal. Really abysmal. Like you can pick parts out of the Clone Saga or Onslaught that were awful, but these Iron Man issues are so consistently just crap comics. Writing a legacy character and making it work takes a lot of talent. Terry Kavanagh is absolutely the very last person who can make a legacy character work. Teen Iron Man has no redeeming qualities whatsoever in these issues and is exactly what you think he is. He is a horrible attempt to make Iron Man cool by replacing him with a hip teenager who goes to college and attends frat parties. He fights an assortment of new villains too, because presumably Iron Man's villains weren't cool and hip enough. There's a one called Frostbite who I was going to refer to as "a blatant Mr. Freeze rip-off" but even assosciating the talent to rip something off is so far and beyond Kavanagh's ability. People might say Blizzard is Mr. Freeze rip-off because of the powerset, but man oh man, Frostbite is a genuine rip-off and even comes with a frozen wife. Don't worry though, Iron Man fans, there is a team-up with War Machine... except it's War Machine in his butt ugly Crossing-era armor that was so bad it forced the character into limbo for years.

The Avengers issues are a step-up in regards to the tremendously dreadful Iron Man issues. The first issue after First Sign is a completely inconsequential crossover with Peter David's Incredible Hulk. If you like Peter David's Hulk run, don't let that sway you. It's written by Howard Mackie and Terry Kavanagh. There's nothing much of interest there, it's a fairly unimpressive story and only worth remembering for it's team roster which included Madame Masque in one of the only missions that didn't involve Black Widow being an outright unlikeable so-and-so to her. Also it is, still to this day, the last ever appearance, or even mention, of Avengers assosciate Moonraker who was never seen again despite being on his supposed deathbed in Avengers Mansion. The next two issues of Avengers are by Kavanagh with Ben Raab and are a two-parter which again is unremarkable but a marked improvement from the others. The story has Avengers Mansion being attacked by a robot called Benedict, who is again a really really unbelievably obvious rip-off of the Predator from the Predator movies. The story has the team being taken out one by one from the darkness by Predator. Simple enough idea with one or two good bits, but I'm confident to say it is nobody's favorite Avengers story. Funnily enough, as the one ok story in the trade, it's also the only one of the bunch that was effectively all retconned away by Kurt Busiek years later. The last Avengers issue is by Mark Waid and is not very good at all. The Avengers celebrate their 400th issue by... basically doing a pseudo-clip show. They fight a bunch of their old enemies who aren't really there and all of whom appear for one panel. It turns out it's Loki. It's a typical fill-in sorta done-in-one affair and, again, totally unremarkable.

So, when there's plenty of quality Avengers stories that remain uncollected like The Gatherers Saga or Ultron Unbound and the only good Iron Man run completely unrepresented in any format, it's baffling why they decided to put out a trade collecting nothing but evidence of the sort of comic that led to Marvel's bankruptcy. I pretty much just bought this for my Avengers collection (which Marvel screwed again by having this one labelled as "Avengers/Iron Man"... although nowhere near as bad as "Iron Man/War Machine" earlier this year) and because, hell, some of the Avengers issues in here have some relevance to Avengers for me (I would take Deathcry, Hercules, Madame Masque, Quicksilver or the second Swordsman over any of or all the modern Avengers). I can look at Mike Deodato's splash pages of the team in action and get some minor satisfaction from and pretending how much more could be done with these characters or this team and pretending the era "wasn't that bad" but I sincerely pity someone who gets this book because they liked the Avengers film, the Iron Man film, or comic books in general. Most of this book is on the verge of unreadably crap and the other half just unremarkable. This is only worth owning if you're in some form of personal denial like myself. 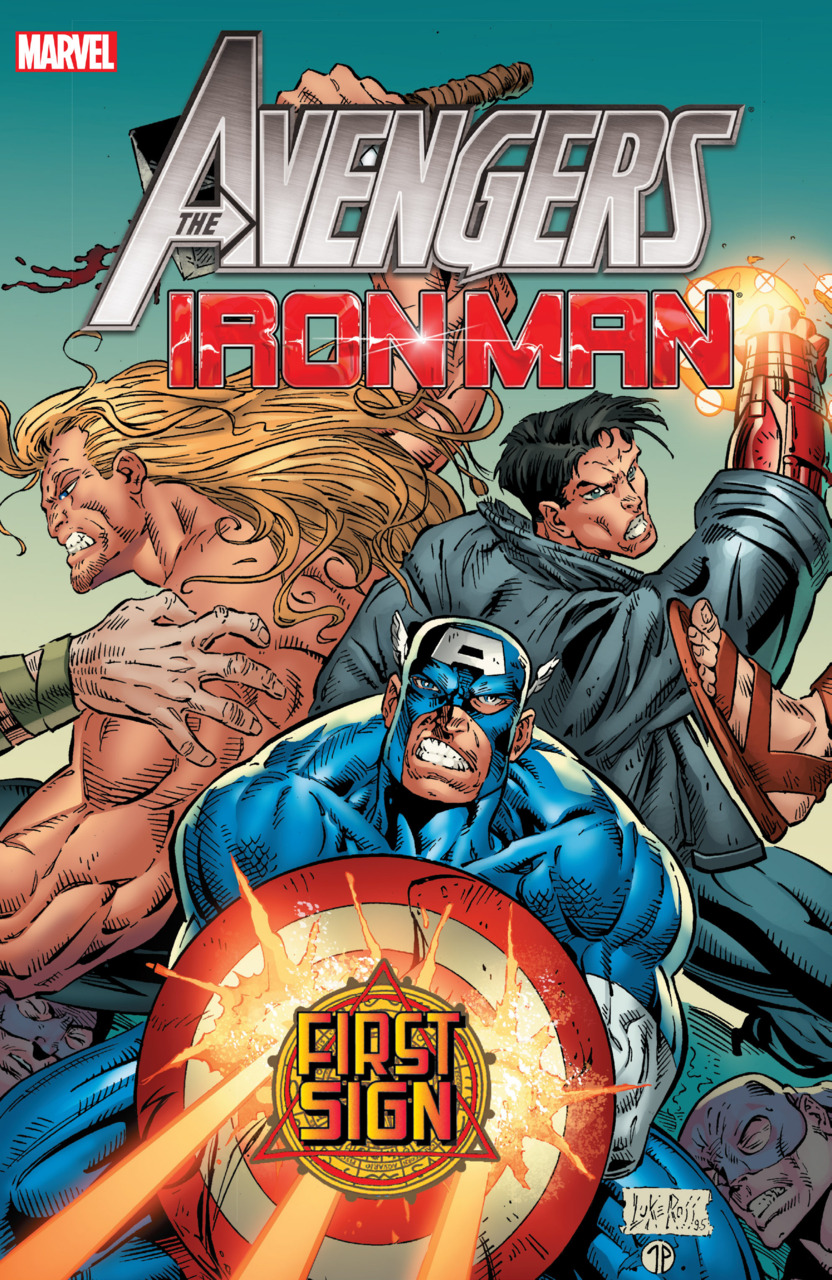