So the Avengers basically leave Gods on Mars unwatched? Forced to set things up for later stories much?

The opener for this story was fantastic the first issue I loved it showed a lot of potential for what was to come but the last issue I was disappointed with it, it was too slow for me and well some of it just felt a little off at points but I hoped the ending of this arc would be good so I hoped this was half decent and made it a good opener for the book.

Ex Nihilo’s new Adam is born but something goes wrong. Abyss flirts with Thor trying to get him on her side but then the Avengers attack and Captain America brings in the new members.

This was a decent/mediocre ending to the story but I wouldn’t say overall this was a bad story it was actually an enjoyable read and I would recommend the whole thing but that’s all I say I recommend it it’s only enjoyable and it is not the best opening arc for an Avengers book there are a lot better openings for Avengers books. There are several flaws in this book I will discuss them more in detail but basically the whole book sort of comes to a close all too nicely literally Ex Nihilo just gives up after Aleph is destroyed by Captain Universe it just felt forced to bring the story to a close in a nice way and yes it gives some closure but it just felt wrong. Also this issue has a gaping plot hole in it which I will talk about in some detail later but let’s start off with the positives

I like how this was hinting at the next arc of the book the White event and I like how there was a lot of potential that could be explored in future stories I know Hickman is very well known for leaving plots hanging and then picking them up later but with this it works because there is masses of potential with this for an interesting stories especially how the origin sites are left for future stories and how Adam is taken off I like that Hickman did this as it means that these interesting plot points aren’t forgotten.

The action in this issue takes up most of the issue but it is well worth it until the ending the action itself develops well showing the power of the Avengers and also the villains the action plays out nicely. I do like the highlighting of the three heavy hitters of the book the three that are all going to get origin issues in the next 3 issues and this gave you a taste of what was too come in for them with them all playing big roles in taking down the villains and I thought this was clever of Hickman as it set them up as big players for the coming story. We also see the other characters fight and you can tell from this that the team will be powerful and that the coming stories will be suitably epic like this fight was.

You can’t deny that Hickman hasn’t built his own little mythos in this book and his own little universe for the Avengers and it’s showing the amount of potential sure the seeds of it are only just appearing here but you can tell that everything is going to come crashing down at some point in this book.

The negative part like I said after Aleph is destroyed by Captain Universe it just ends literally in two pages Ex Nihilo and Abyss just surrender literally it just fell in to place to nicely and well I just felt it was forced to end the story in that way it just felt rushed and forced to let this story end in this way it was a problem for me but while the overall ending was rushed I did like the last line of the book which I thought was clever and I really want to see that explored more as that was a very intriguing point in the book.

Now my main problem with this is the gaping plot hole in it that leads to this forced and rushed ending and it is THE AVENGERS JUST LEAVE TWO PEOPLE WITH THE POWER OF GODS ON MARS AND THINK THEY WILL BEHAVE???? Sorry but this just felt too forced I mean seriously Ex Nihilo attacked Earth and took on the Avengers and he created this world on Mars and his sister could control the Hulk? Seriously haven’t they learnt anything in the many years they’ve been Avengers you don’t just leave gods on a planet with no one guarding them and expect them to behave nicely I just felt this was forced so that the plot could later be continued (which it will) sorry but plot holes like this can be avoided.

The art is fantastic I’ve had a few problems with Jerome Opena in these few issues but they have been minor problems and I still don’t like how he draws the Hulk but everything else looks fantasti the detail is incredible for someone on a bi-weekly schedule (granted it’s only for three issues) but the art in this is fantastic Opena does a great job making all the characters look 3 dimensional and realistic. I particularly liked how Aleph looked as the detail on him was great making him look powerful while still looking like a robot and when he becomes a more battle armoured and powerful looking robot it’s amazing and looks very powerful. Opena draws every character great (except for the Hulk who looks like a Gorilla) and I can’t wait to see what he does on Infinity which will look fantastic I’m sure.

Sadly this was a disappointing ending to the book it was forced to get the story to get the story into the correct place and the characterisation of the Avengers felt off I mean didn’t anyone object to Gods being left alone on a planet unwatched? I do however think overall I would recommend this story as it is a nice opener to the book there are however better openings to Avengers books than this, at least the art is good though.

A title having Jerome Opeña's art and Dean White w/ Frank Martin Jr.'s colors is spectacular for the eyes guaranteed, no doubt about it, unfortunately this issue felt to me a little weaker than the previous two in the writing department, particularly because of the difficulty level that the Avengers faced in the first two issues compared to this one. It was great that Hickman used different characters to present the solution to the Ex Nihilo threat, like Captain Universe's part, but on the other...

The Universe has spoken 0

The first thing I have to say is that Opena is the guy for this series.He has an awesome style and his take on the Avengers and the new characters that appeared in this first arc was amazing.He makes them look as the way they should look like and doesn't have a single bad panel at all.The big,awesome,stoty-telling part of the issue was the big battle between the new Avengers and Ex Nihilo,his sister Abyss and Aleph.The battle takes almost the whole issue and it is worth it.It is not one of those... 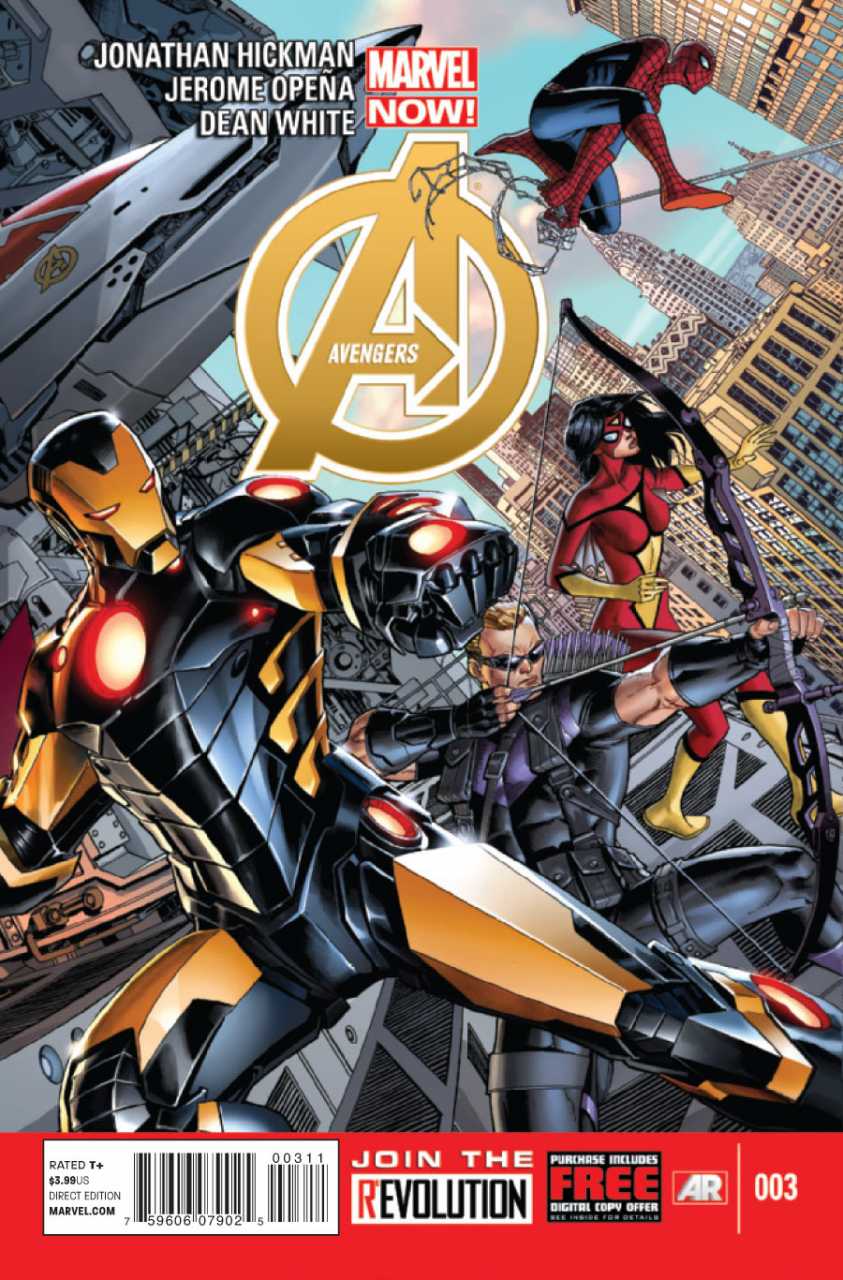 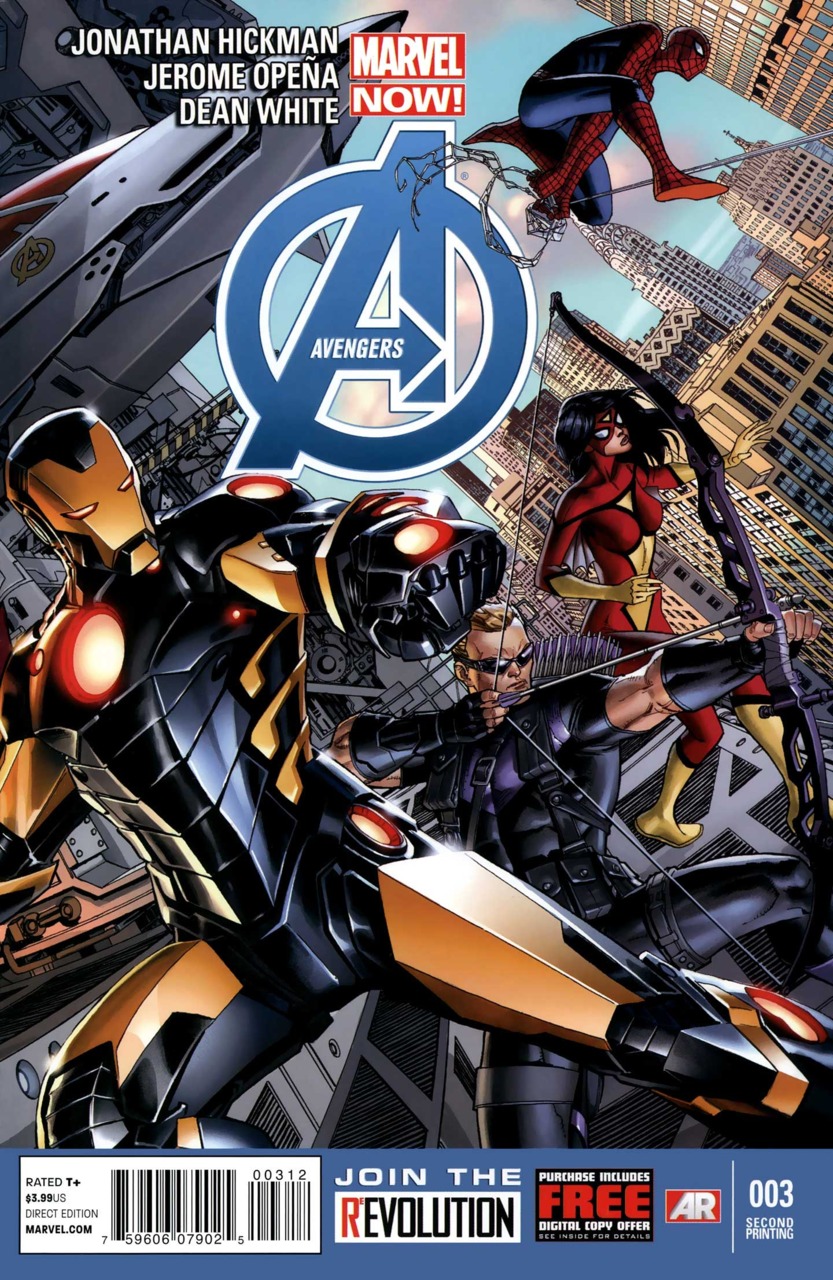 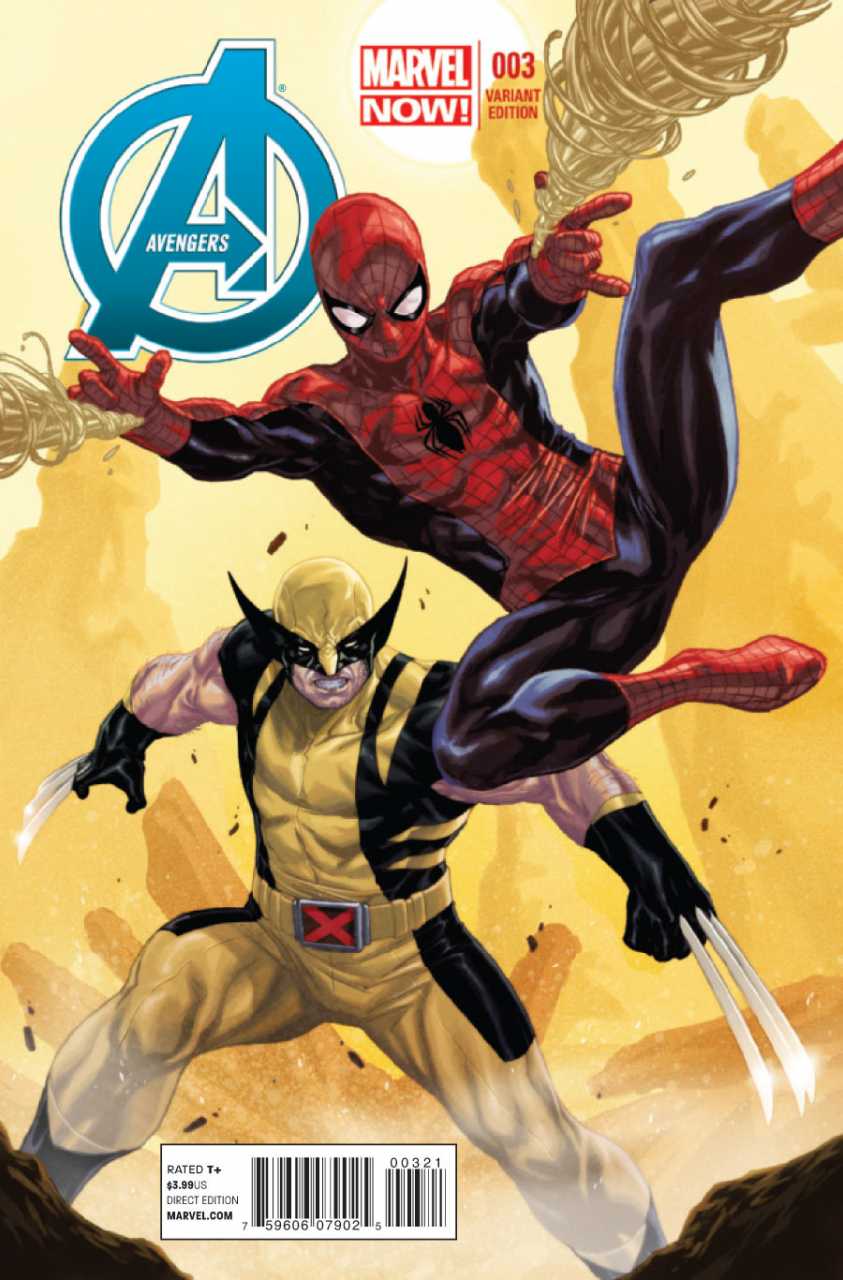 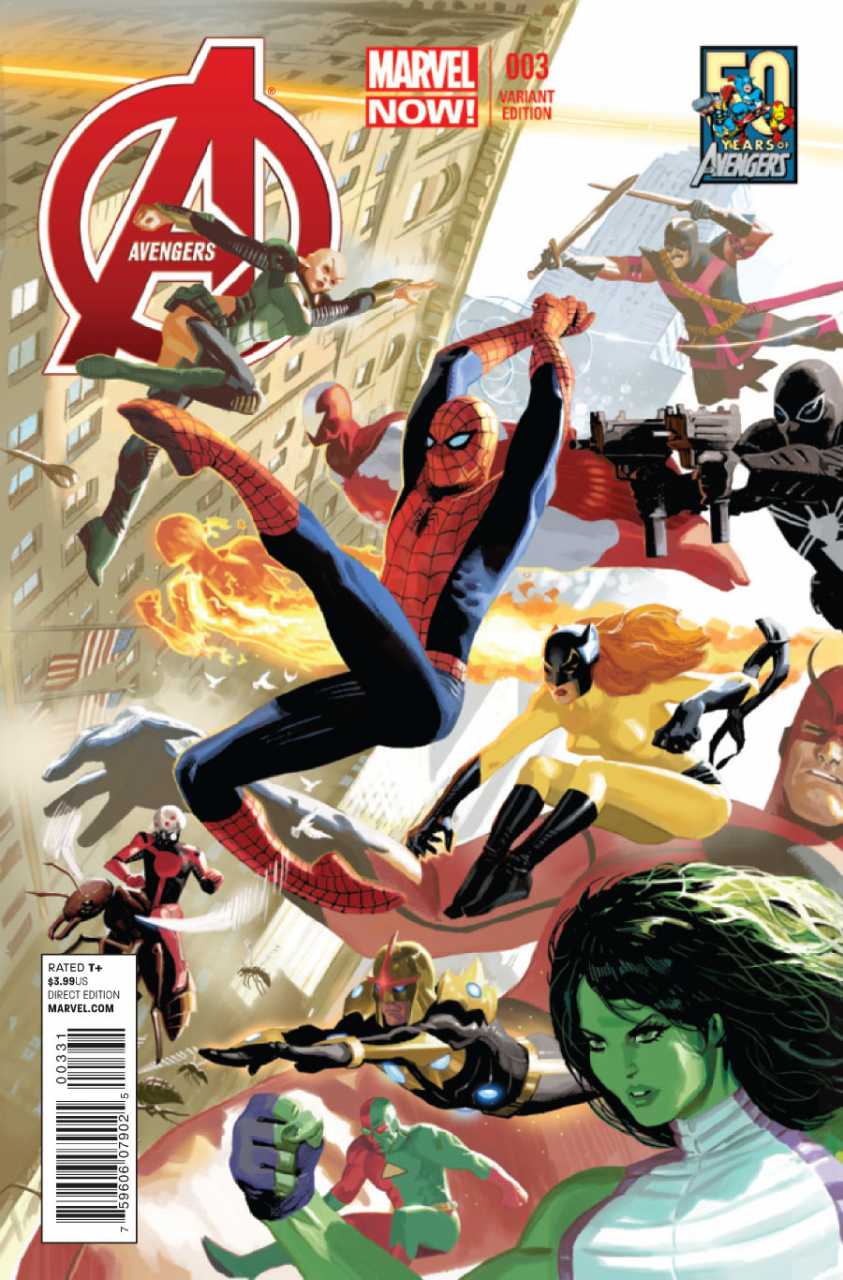 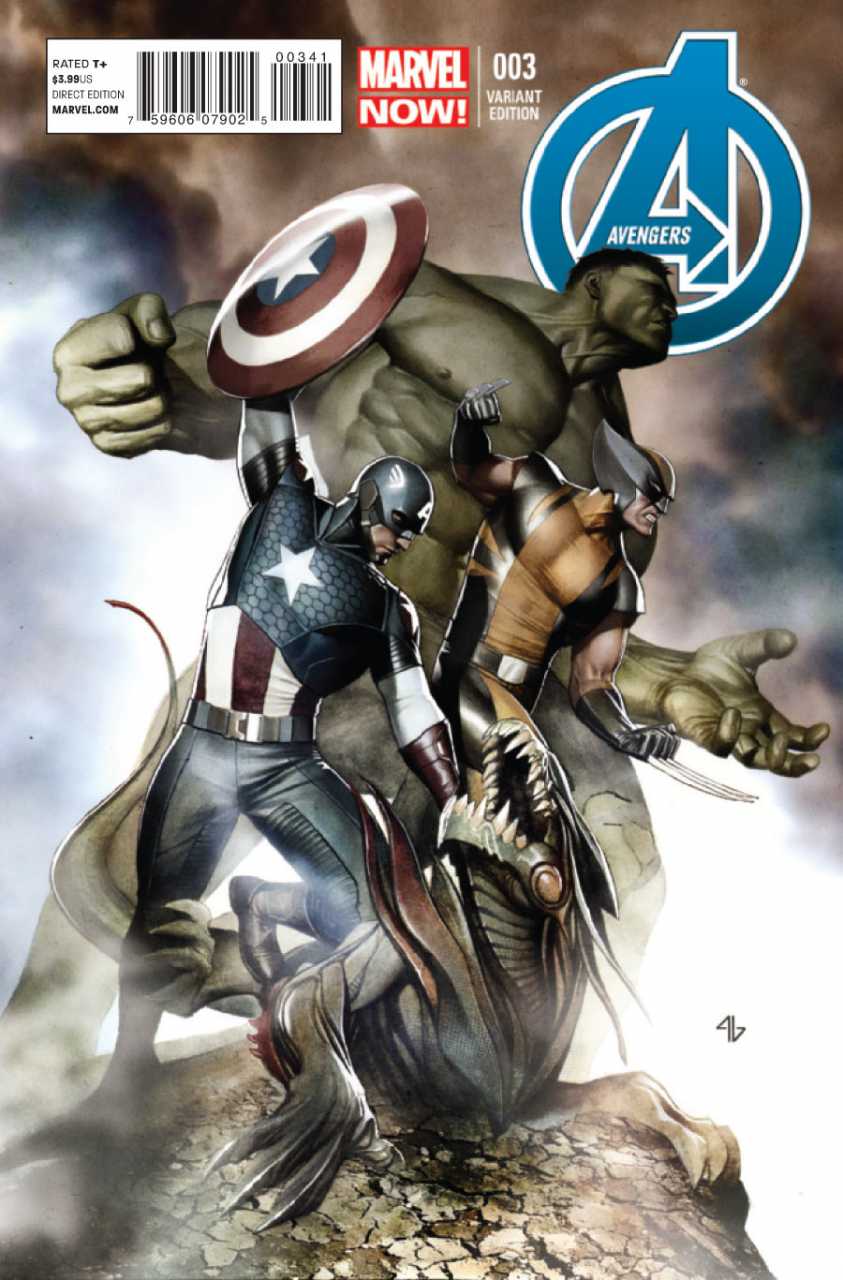