the_waffle's Amazing Spider-Man: Renew Your Vows #2 - Part 2: "Because We Said So, That's Why." review

So issue 2, felt like a long wait for this one but I had rather high expectations. Yes, for the first time (in ever) I had expectations on a Slott book that weren’t exceedingly low.

Then I saw the post-secret wars stuff, and it looked ridiculous. Absolutely, ridiculous.

I actually had A LOT to say this about this, but I’m going to save it for now. Though I will say this; I can’t wait to see it all blow up in Marvels face because I’ll be there to ‘review’ (tear it to shreds) when it does.

Have these new developments put a damper on the arrival of issue 2, for me they did, but after reading it, not so much anymore, which is a good thing.

Now, the comic itself, is solid. Without being a nitpicker, there’s not much to criticise. I do wish it was longer to flesh out some themes, I have a feeling some things are going to be rushed and glossed over like spider-verse but that doesn’t mean the comic is concentrating on the unimportant things either.

The whole moral thing about Peter killing Brock last month was not a big deal at all, in my eyes. If there was no other alternative, Peter would kill to save his family. What, do you honestly believe Peter would sacrifice an innocent by letting some scumbag live to uphold his code, no he wouldn’t. Obnoxious Fanboy: NO, HE WOULD FIND ANOTHER AWAY. Me: Well, no in Amazing Spider-Man Vol. 2 #35 (written by my favourite Spider-Man writer JMS/Spider-GOD) Peter pretty much admitted to himself he would have put Morlun down himself if Morlun’s assistant Dex didn’t beat him to it.

It's good to see some form of remorse for Peter killing Brock at all, but that’s not what I specifically want to see.

What I find more interesting is the way Peter and Mj are raising Annie, it’s the same teachings that lead to the death of Uncle Ben, pretty much by turning a blind eye. This is what I wished Slott focused on rather than that killing dream. I see this Peter similar to the Peter before his Uncle was Shot. Instead of a killing Brock dream sequence I would have preferred a flash back seeing Peter regress back into the person he was before his Uncle died, not using his powers to help others etc.

But of course Spider-Man does come back at the end of the issue to save his family and one-shots Rhino which I was proud of and he makes quick work of the crappy super-villains. There was a bit of twist, revealing there to be more people with powers, with also an underground resistance gradually building to take on Regent, the new Secret Avenger’s maybe? The leader looked like he was wearing glasses, I’m guessing he could be Daredevil. They’re definitely Avengers this time as they’re literally avenging the Avengers who died last issue lol

The Dan Slott cameo, didn’t really care for. Are you Stan Lee all of a sudden? Though the guy on the left reminded me of Bruce Timm.

We get a little more insight into Regents character, but right now the only thing I know about him is he is seriously in love with himself, he’d have to be with that many billboards and posters of himself lel. He does says he’s doing things for the greater good, which separates him from the likes of Darkseid who would literally make hell on Earth, but making a character the opposite to another doesn’t make them interesting. Batman in many ways is the opposite to Superman but there is so much more to him. Right now Regent needs that, badly.

Basically Regent is underdeveloped. He is pretty thirsty for powers though, which makes me think he wants the Parker's for their spider-sense.

The whole building apartment scanning scene was rushed over, I guess Annie’s ‘inhibitor’ masks her powers from Regents authority but what about Peter? Do the scans only detect powers that are being used at the exact moment? It have to be otherwise they’d caught by now. Like I said, rushed.

Slott still makes Mj relevant and competent. The fact she’s the one who pulls out the black suit for Peter after Venom and issue 300 is a good step in the right direction for her. Like I said last review, Annie is a powerful motivator for Peter, she’s the reason he comes out of hiding and judging by the covers for next installments her role will be expanded. She’s still afraid of Venom despite him being dead, I’d like a scene with her seeing Peter in the black suit finally putting her fears to rest otherwise this ‘shadow’ stuff is pointless without closure.

This issue also marks the return of the Sinister Six, Regents Sinister Six. They're not the most powerful group we've seen, but nothing Peter can't handle.

-Dialogue, this might as well be a requirement in every review of mine because I don’t ever see it ever improving.

-Peter and Regent are underdeveloped, Regent way more so than Peter.

-The apartment scanning scene left too many questions

-Some things feel rushed/glossed over

-Not much action, not a big deal though.

-Who cares about the killing! It’s over! This no one dies rule needs to die itself.

(Okay, don’t get me wrong I’m glad they had a dream sequence to follow up Peter killing Eddie, but I feel Slott just stuck it in there so there wouldn’t be backlash from fans who feel Peter is a merciless killer, which he wasn’t. If they could have had remorse for Eddie AND flesh out Peter’s regression through a flashback maybe that would be enough and I wouldn’t be bitching.

In issue 1 you see Peter as Spider-Man standing with Mj, then the next scene is Peter years later letting the vulture escape there had to be something in between to show the regression and there wasn’t.)

In conclusion another solid installment, far from perfect, but solid nonetheless.

Other reviews for Amazing Spider-Man: Renew Your Vows #2 - Part 2: "Because We Said So, That's Why."

It's only getting better 0

GREAT! AMAZING! It's only getting better so far this is one of the best secret wars story arcs rolling. The art is excellent you can tell they took the time to get the art correct . Once again this isn't earth's 616 spider man its a world where mary jane and peter have a life together and have a daughter, this story arc is one of the best spider man to come out since some of superior spider man. If someone tells you they don't like this arc immediately get the foot outta their mouth before they ... 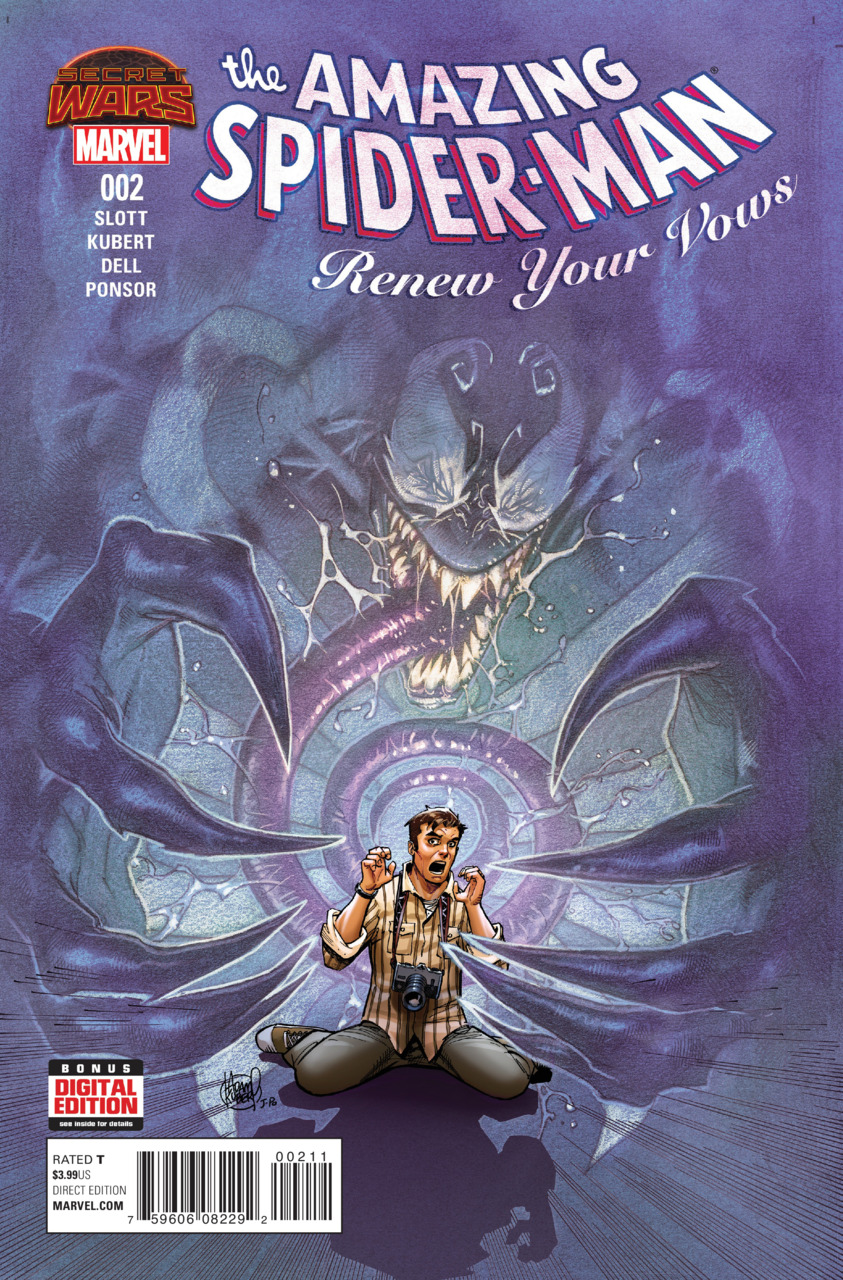 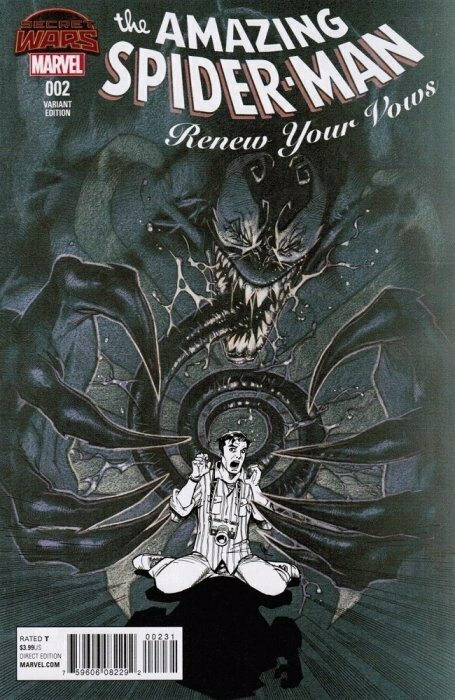 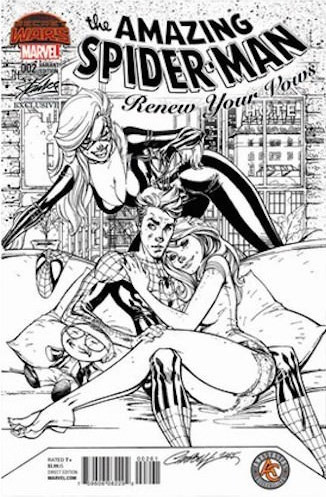 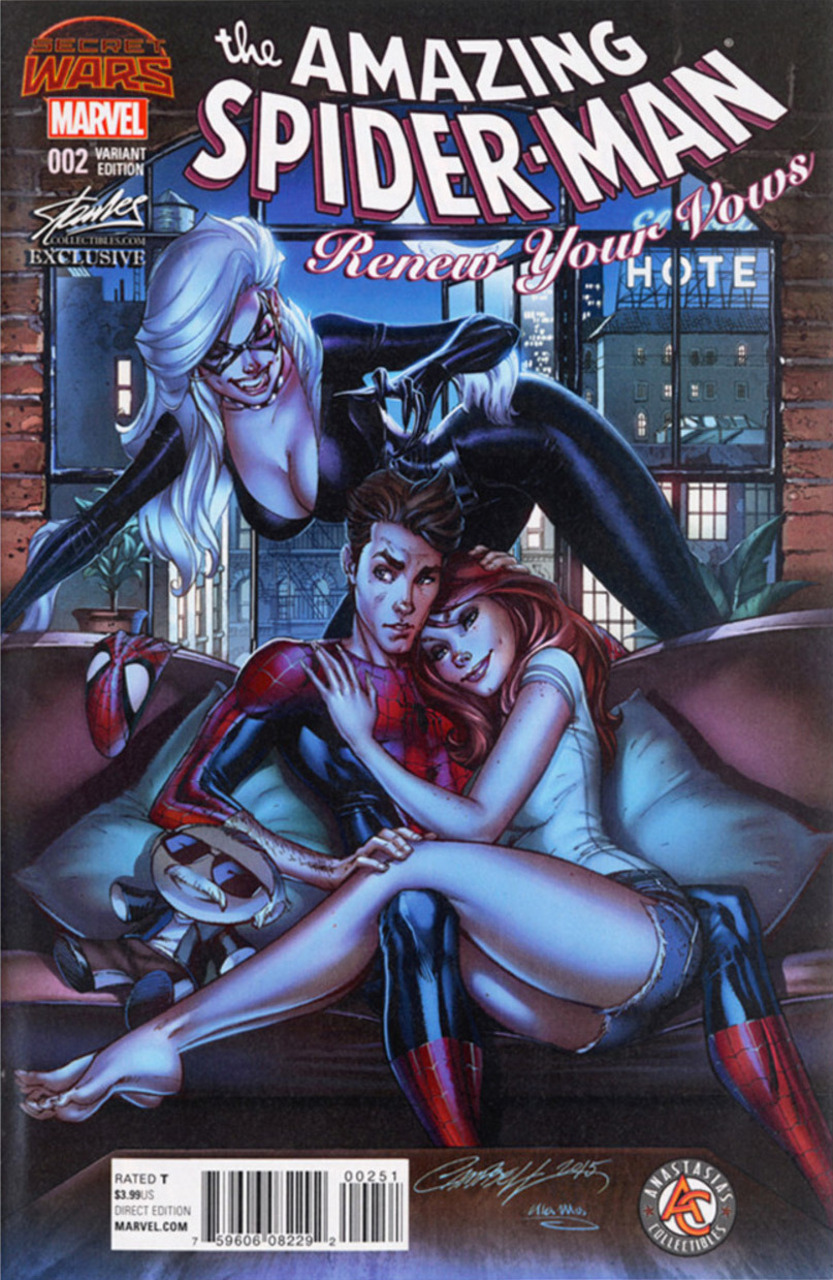 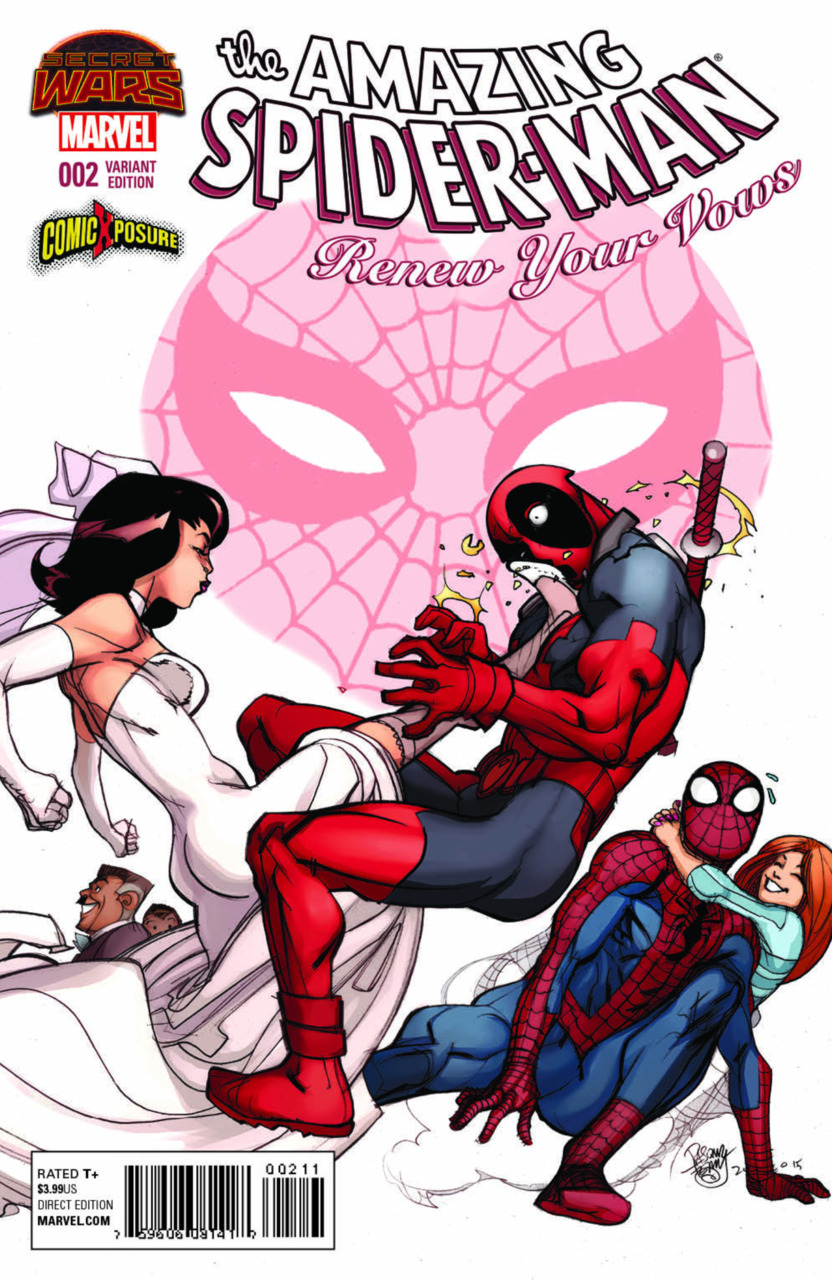 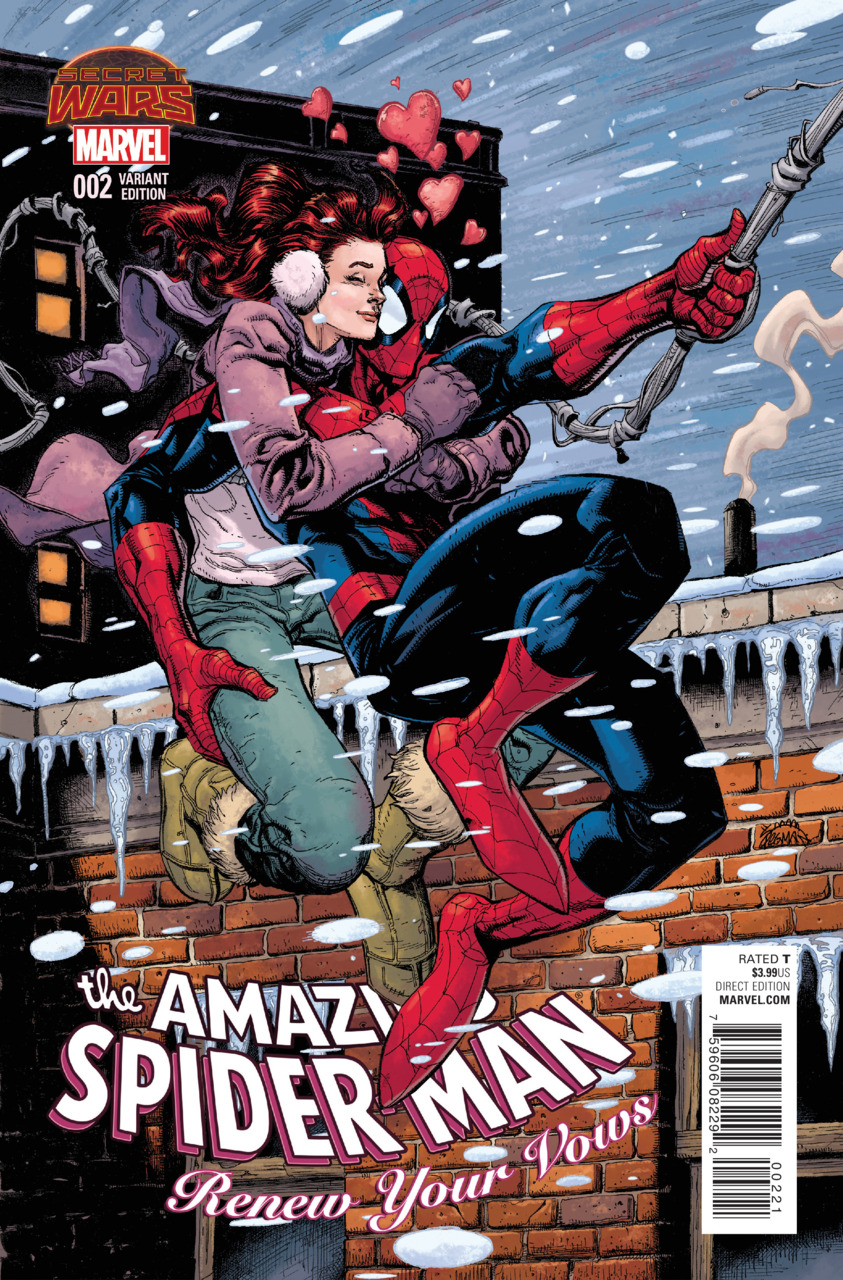