mavericstud9inches's Amazing Adventures #20 - The Coming of the War-Lord! review

Jonathan Killraven and M'Shulla Scott flee from a gang of keeper's men. Their "energy guns" run out of charge,-maybe because lasers don't bloom out like regular pistols, so they duck into a museum, pursued by the gang. Killraven topples a large Egyptian statue onto one group, while M'Shulla uses a crossbow to drop a suspended cannon onto his foe. They interrogate the last one to learn where the keepers keep their weapons. He says, "LaGuaaAGGGHHHHH!" A post-hypnotic suggestion kills him before he can betray the location of the depot—but Killraven has deduced it. Before they leave the museum, Killraven picks up a new sword and a new outfit,that looks a bit like either Spartucus cast off armor or remnants of Captain America's costume- along with several other items. Outside they find an army truck, and it only takes two hours for Killraven to get it working again.

They follow the Belt Parkway across Brooklyn, then the Verrazano Narrows Bridge to Staten, their headquarters. From the bridge, though, they see a Martian tripod approach, aim its heat ray at them, and fire! The bridge collapses! Killraven and M'Shulla dive from the truck and look underwater for some weakness in the tripod. They find it in a sandstone outcrop that supports one of its legs. When they pry the outcrop loose with a beam, the tripod falls. M'Shulla Scott retrieves some of the weapons they found.

Elsewhere, Warlord tells a Martian, Master 4, that he has planted clues to bring Killraven there. After Killraven injured him during an escape (alluded to in issue #18), he says, he lost his right arm and part of his face.Strangely enough,I don't remember seeing him in the escape sequence. Now he wants revenge for the pain he suffered as a guinea pig in the Martian "prosthetic research experiments." Unlike the scientists who were coerced into service, he serves the Martians willingly and feels he has earned his revenge.

Killraven, M'Shulla, and the other freemen sneak into LaGuardia Airport and locate the weapons depot. Warlord interrupts their plundering and beats Killraven into submission. He promises the freemen that they will see Killraven again in the Arena of Mutants ..

Other reviews for Amazing Adventures #20 - The Coming of the War-Lord! 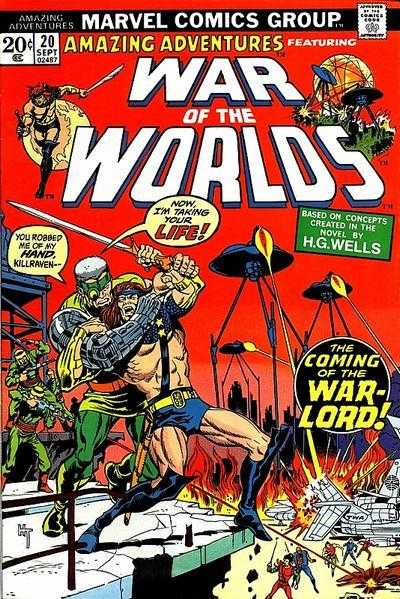