Welcome to the Danger Room

This has been by my favourite series since the start of Marvel NOW!, and although it's not always been perfect, it has been very entertaining, and fun, as well as being the best X-Men series I have read in years.

The younger X-Men battle the Sentinels in the Danger Room, plus Mystique returns, and she's brought Sabretooth.

This was a phenomenal issue, and one of the best in the series so far. Brian Michael Bendis may not be doing a brilliant job on Age of Ultron, but he isn't half doing a good job on his regular Marvel NOW! series', as both this, as well as Guardians of the Galaxy has been amazing. There wasn't anything that I could fault story wise in this issue, as it ticked all the boxes, being exciting, entertaining, fun, interesting, and containing plenty of action, everything I hope for in a comic, even though I'd settle for half of that. Bendis also gave some mystery to the issue, having characters question each other, and others doing curious things, but I'll talk more on that later. Another thing that Bendis has done perfectly in this series is handle the younger X-Men. As those who read my review regularly know I was more than skeptic on the idea of bringing the younger X-Men of the past to the present, but that's been the best thing about this series, and Bendis has handled it very, very well.

The art on this issue was fantastic, and I was happy to see the return of Stuart Immonen. Although I've been enjoying David Marquez' art over the last few issues, actually preferring it over Immonen's at times, I am happy to see Immonen back, as I was so happy when I heard he was working on the series to start with, and it's really his series, along with Bendis. Plus Marquez will be returning to Ultimate Comics Spider-Man soon, so I'll be able to see his art there. The break has really done wonders for Immonen's art, as I felt the last few issues he worked on lacked a bit of detail due to the tight schedule, whereas now it's much more detailed, and overall looks much better, and as good as it looked in the first few issues. I also love how Immonen puts so much emotion into his work, as you can easily tell what the character's feeling. I did however find one sequence when the young Jean Grey, and Kitty Pryde are talking telepathically a bit awkward as they still showed body language without saying anything, which would look mighty strange to anyone around at the time.

The way the issue started was brilliant, and I loved that it made me question whether the Sentinel's were actually attacking, although I always thought it was the Danger Room, and it was obvious before long. Besides that the sequence was totally amazing, and I loved that you get to see the inexperience from the younger X-Men, whilst also seeing the teaching skills from Kitty, who's become one of my favourite X-Men over the last couple of years. I also liked that during this you could see friction between certain members, as it's been nothing but smooth for the younger X-Men, and some are copping with mindblowing realizations. There was also an interesting conversation between Kitty, and Jean. I already mentioned this earlier in my review, but that was purely on the art, whereas this is about the actual event. Kitty was worried about Jean's new powers, and was explaining that people are scared that she can prod around in their thoughts whenever she wants, but it was the child like reaction from Jean that made it interesting, as it showed that these X-Men are still children.

It was also revealed due to Jean using her telepathic powers that the young Cyclops had met Mystique, something that the rest didn't know about. The issue were Cyclops, and Mystique met was very interesting, and I always wondered what would happen when the others found out so it was interesting to see. Nothing really happened, apart from Jean being jealous, Kitty being concerned, and Cyclops feeling violated, but the way Bendis handled all these things was brilliant, and you could feel a lot of emotion throughout the sequence, making it very dramatic, as well as interesting.

Talking about Mystique, she also reappeared this issue, but that wasn't a surprise as it was advertised in the solicit, as well as being on the cover. I won't talk much about the actual sequence as to avoid spoilers, but I will say that it was very interesting, and the involvement of Sabretooth was also interesting. Sabretooth didn't actually do anything, or at least anything to take a huge interest in, but it was interesting that he was working with Mystique again. We've seen the two develop a relationship between the Wolverine: Back in Japan, and the Uncanny X-Force Final Execution stories, so I wasn't surprised to see the two still working together, but I was happy, as it shows that Mystique has something big lined up, and that Bendis is acknowledging the characters history. The only minor problem I'd say is that I was expecting something a little more explosive, although this was interesting it wasn't quite as good as I expected. Also I'd have preferred if Sabretooth did more, as he felt like the mindless sidekick again, and I liked that he's been independent in recent series'.

I'll close by talking very briefly on two subjects, as they have the possibility for huge spoilers. Beast had a very interesting conversation with the young Angel, and although like I said I won't go into details it shone some light on events that have happened, and things still to come. The second thing I'll be even briefer on, and that's simply that the end of this issue was mindblowing, and I'm so looking forward to the next issue.

This was one of the better issues in the series so far, and it was beyond brilliant. It was fun, interesting, entertaining, and full of action, all at the same time, as well as leaving some interesting openings for future issues. Basically this showed exactly why I love this series so much, and I'd highly recommend this issue, as well as the series as a whole.

Other reviews for All-New X-Men #9

Cover &amp; Solicit - 5/5Would I pick-up or buy the comic based on the solicit or cover alone?Are the alternate covers appealing?Does the solicit and cover portray what happens in the issue?Do I like the artist's style on the cover?Art, Colors &amp; Inking - 5/5- Weighted DoubleDo I personally like this artist's style?Does the artist stay true to the characters appearance?If there are multiple artists do they blend well and not disturb the reading experience?Does the coloring/inking blend well w... 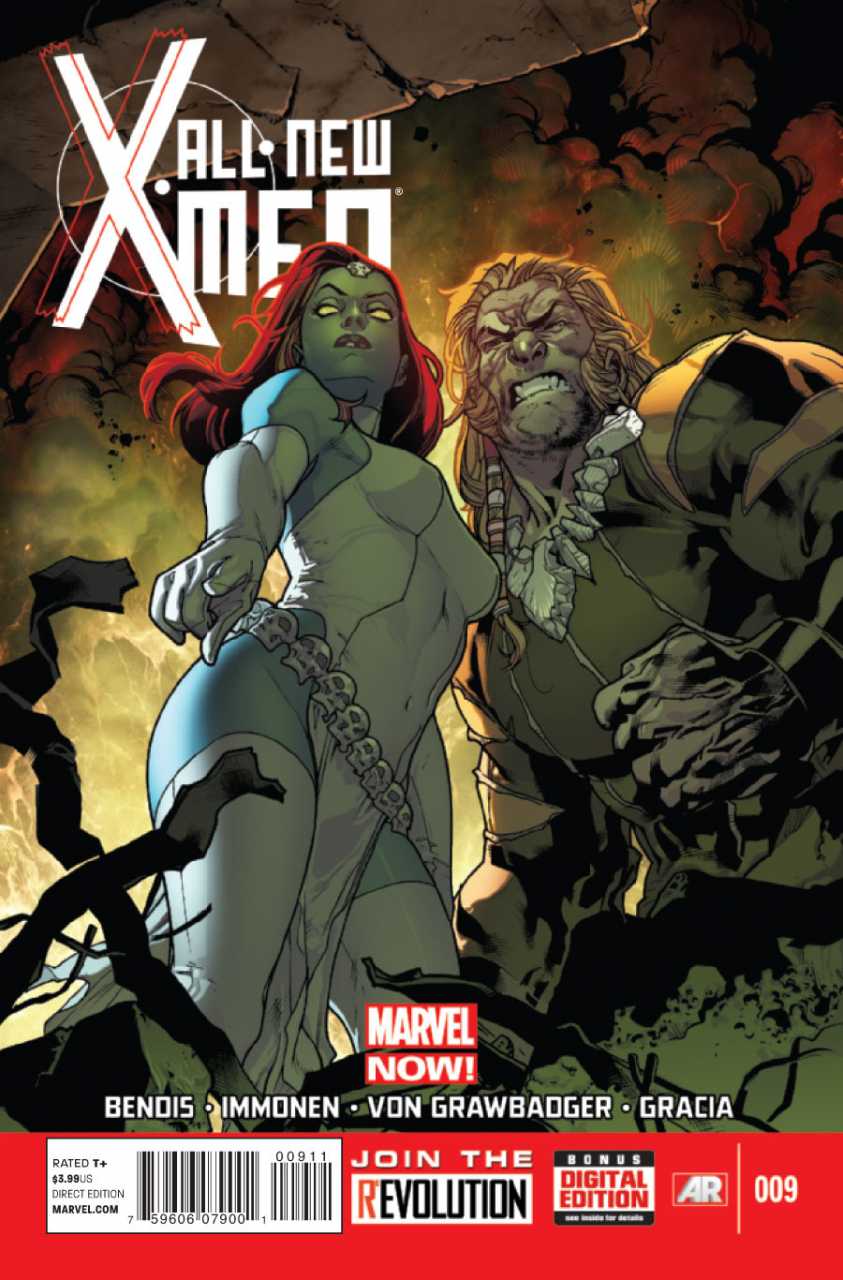 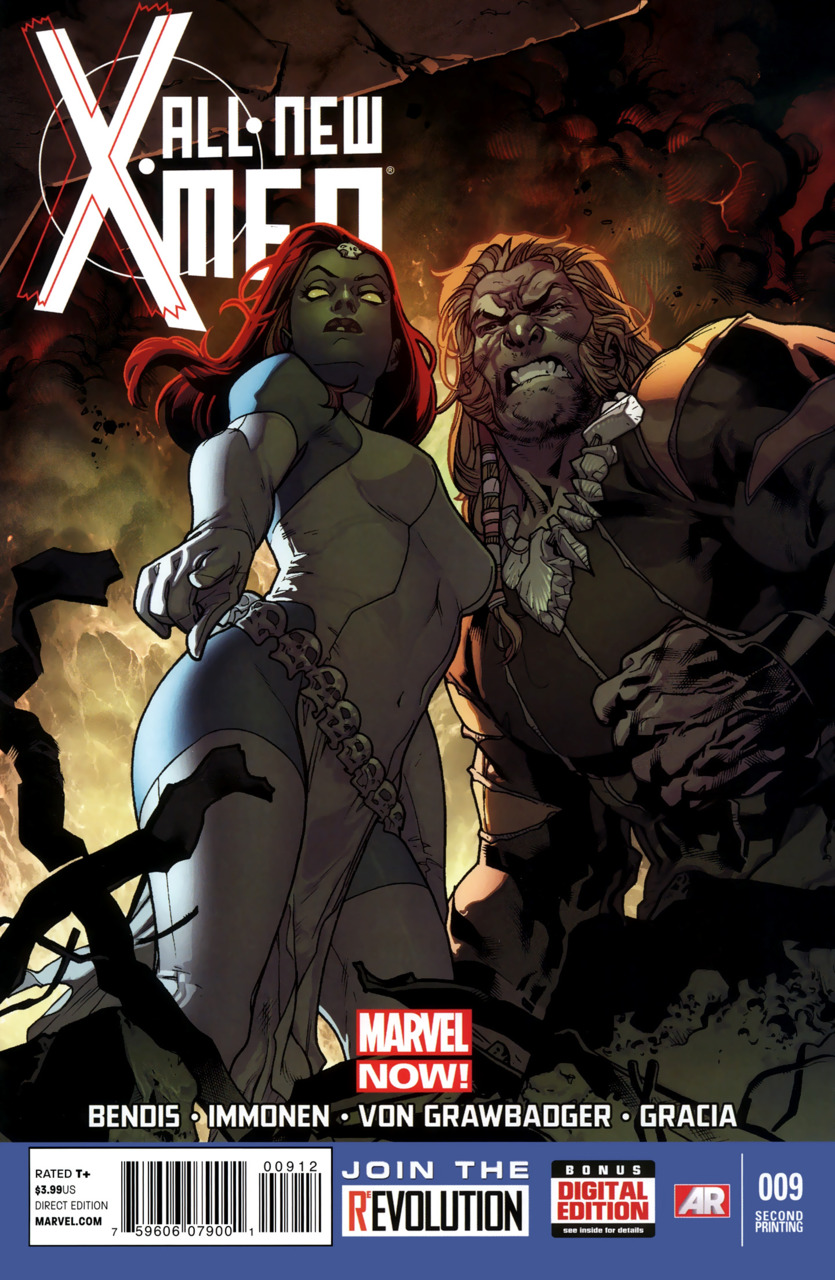